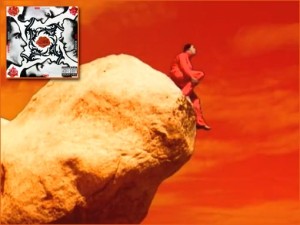 So, my friend Lucas did a post on this same subject a while ago; I liked the idea so much, I wanted to create my own spin on the subject of hauntingly beautiful music. Many sources define “haunting” as “remaining in the consciousness” or “not quickly forgotten;” however, the significance of this term surpasses its somewhat shallow definition. Music that is haunting doesn’t just remain in the consciousness for a long time, it transforms it. The moment this music enters our ears, it lifts us to a higher plane of existence. We begin to contemplate, as The Shins put it in one of the songs I will reference, “the bitter mechanics of life.” We forget how and why we exist. The only thing that matters, in that moment, is the music that is filling us, and we are forever changed by it.

All philosophical musings aside, here are nine of some of the most hauntingly beautiful songs I’ve been lucky enough to encounter throughout my life. Enjoy!

Alright, kids, here’s a quick lesson in music theory. For a tune to “resolve,” harmonically, it typically moves from the dominant chord (the key that is at the interval of a fifth above the tonic key) the tonic chord, or the “home key.” “Breaking the Girl” begins in A-flat major (the tonic key), then modulates to a new key (B minor) at the chorus and ends on the dominant chord of B minor (F-sharp major) without properly resolving. These multiple instances of a lack of harmonic resolution frustrate the ear and make the listener want to hear more, hoping for a resolution that never occurs. All of this, plus the lyrics, which talk about the frustrations of a life transformed (destroyed?) by love, make for a very hauntingly beautiful song.

Just listen to that intro! That piano solo is simply incredible. It sets a relaxed and ambient mood. Then, when the guitars enter, the mood completely changes.

I challenge anyone to find a single human being who can listen to this song without getting chills. What makes this song so haunting are the vocals. The harmonies of this song, so wonderfully and tragically dissonant, pierce through the soul and stupefy all who listen with their beauty.

Spacehog- “Only a Few”

You may know of Spacehog from their 1996 hit “In the Meantime.” After listening to this song, it’s really hard to believe this band never made it past “one hit wonder” status.

Need I say more? This song really speaks for itself.

This is three-and-a-half minutes of pure profundity. Ending on a chord other than the tonic chord, it’s also another example of lack of final harmonic resolution. This song deals with love, religion, death, passion, and the meaning of life.

The Shins- “Port of Morrow”

You may have listened to “Port of Morrow,” but you haven’t truly experienced it until you’ve heard it performed in front of thousands of people, all swaying, eyes closed, to the slow and haunting progression of guitars, drums, and James Mercer’s voice on a warm and cloudy summer afternoon (Bonnaroo 2012). If you’re unable to, or haven’t had a chance, to hear this song performed live, try listening to it outside, while taking a walk on a warm spring night, or laying in the grass with your eyes closed.

Another favorite from the late 1990s. The undertones of love, death, loss, and disappearance haunt the listener, but it is the mix of this undertone of sadness with the happiness of the two lovers before their inevitable end that render this song one of the most tragically and hauntingly beautiful tunes out there.

Since I’m a classical musician, I had to include at least one classical piece on this list. Samuel Barber is a classical composer from the early and mid 20th century. His 1953 work Summer Music encompasses all of the unique aspects of summer: summer storms that end as quickly as they come, swimming, and liveliness.