The Regrettes, an LA based rock band, unapologetically raised hell at their Nashville show this past Friday. From the moment they stepped on stage, it was clear that their energy and passion for their music was going to rival anything the crowd had heard before. Front woman, Lydia Night, spent almost the entire night jumping across the stage without losing any vocal power or stamina. Her kinetic performance, as well as a stage presence that extended far beyond the stage, is what encouraged a mosh pit to start forming only a few minutes into the set. The energy seemed to reverberate from the stage to the crowd and back to the stage again. This connection between the band and the audience made it almost impossible to look away. The band’s artistic prowess was also made clear from the moment they stepped onstage, opening with the first track of their new album How Do You Love?  This track, titled “Are You In Love?” features spoken word poetry (similar to “The Prologue,” the opening song on Halsey’s Hopeless Fountain Kingdom), a very interesting choice for a rock band to make that shows how unafraid they are to step out of the norm and commit to their own brand of artistry. 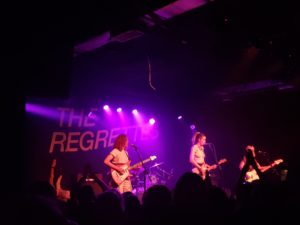 Night kept the crowd engaged with some audience participation during the song “Go Love You,” from their latest album How Do You Love?

There is also much to be said about The Regrettes’ opening acts, The Pressure Kids and Greer. The Pressure kids are a Nashville based band who all met at Belmont during their time there. While the Pressure Kids are not officially on tour with The Regrettes, the beauty of being in Nashville is that groups such as The Pressure Kids can play shows with many other bands all within one city. Their lyrics might be a bit sad, but they are perfectly juxtaposed to the upbeat music and numerous guitar solos. While The Regrettes paint a perfect picture of modern rock, the instrumental solos of The Pressure Kids are reminiscent of a past time. It could make anyone nostalgic, whether that nostalgia be for a garage band or a ’70s rock concert. The somewhat airy vocals of lead singer Nick Johnston are not a common sound in rock, but lend themselves nicely to the range of emotions the band’s songs invoke. 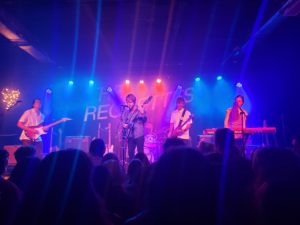 The Pressure Kids opened for The Regrettes

Greer, the most hipster group of the three, is not from Portland as I originally assumed, but from Orange County. Greer, named for the lead singer’s sister who passed away, is a relatively new band, having been started less than a year ago, which makes the fact that they are an opening act on a national tour all the more impressive. While their sound is considered rock, it leans toward a more alternative style, with unexpected time signature changes and more laid back instrumentals. Their performance was very personal, as lead vocalist Josiah Greer began their set by introducing each band member with both their names and their nicknames. Josiah Greer’s vocals were even more impressive than his stage presence, as his range seemed to be limitless. There was never any strain or even a hint of discomfort at any of the rather high notes he hit. The group is still young, but I expect that their name will become common in indie music circles or possibly even mainstream music. 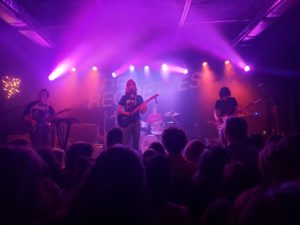 Greer strikes a laid back chord