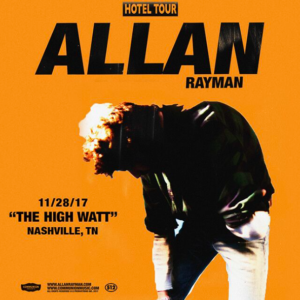 On Tuesday (Nov. 28), Allan Rayman began the final leg of his Hotel Tour with a sold out show at The High Watt. Within the past two years, the Toronto-based singer/songwriter has released two studio albums, an unplugged album, and his most recent EP Courtney. His unique sound can’t be defined by one genre; it fuses elements of R&B, hip-hop, soul, and folk to create a country-like storytelling platform.

In his short career, Allan has gained a reputation as being quiet and mysterious; he largely refrains from self-promotion, keeping his music at the center of attention. His early live performances particularly exemplified this reputation, for he was known to barely acknowledge his audience, only speaking long enough to disclose that he wouldn’t be speaking much.

Tuesday’s show maintained a similar feel, with Allan taking the stage in a T-shirt, flannel, and Adidas joggers just before 10:00 pm. Without a word, he rather fittingly opened his set with “Tennessee,” bringing the vape-friendly crowd to life as they danced, swayed, and sang along. Allan’s producer and electric guitarist joined him onstage, impressive guitar riffs and solos adding an element of rock to the stripped-down set while heavy bass shook the audience from head to toe. 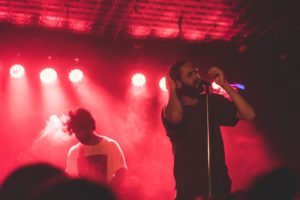 Aside from a brief introduction, the beginning of Allan’s set lacked much commentary. Allan predictably told the crowd that he doesn’t like to talk much, but his explanation of why seemingly contrasted with his subdued reputation: “Once I start I never stop.” As soon as he said this, it seemed as though a switch had been flipped. He removed his flannel to the tune of several “oww oww!”s from the audience and proceeded with a bass-intensive performance of “Word of Mouth.” He was quite chatty throughout the remainder of his set, frequently pausing between songs to make a comment, ask the crowd how it’s doing, or just cackle into the mic for no apparent reason. At one point, Allan joked that whether or not the crowd was having a good time, “I’m gonna have a good time. Tonight is all about ME!”

Allan’s simultaneously smooth and spasmodic movement behind the mic stand resembled a suave robot, starkly contrasted with his excited, one-legged jumping around the stage during guitar solos. As the night progressed, Allan’s movements grew larger and more emphatic, a progression that may or may not have been related to the beers he’d been sipping throughout his set. Regardless, Allan’s vocal performance was stellar from start to finish, with minimal instrumentation allowing his soulful rasp to take the spotlight.

It was clear that Allan Rayman thoroughly enjoyed himself on the High Watt stage. His enthusiastic performance and plentiful commentary offered a rare glimpse into the mysterious artist’s personality, and I thoroughly enjoyed and appreciated the opportunity to get to know the man behind the music a bit better.