This past Friday and Saturday marked the 3rd year of the return of Atlanta’s Music Midtown Festival to Piedmont Park.  The two-day festival included three stages and a diverse line-up ranging from rap genius Kendrick Lamar, to classic rock titans Journey, to live show titans Red Hot Chili Peppers.  I attended the festival with a friend who is a graduate student in chemistry at Georgia Tech.  In short, it was an amazing weekend.  After the jump, I’ll be giving you a look at it day-by-day, and then summarizing the festival experience as a whole to wrap things up.

The first act we saw on Friday provided a great introduction to the weekend to come: 2 Chainz.  The rapper played such hits as “I’m Different,” and his collaboration on Kanye West’s G.O.O.D. Music, “Mercy.”  He ran through his set with the crowd always in mind, prompting them to “throw your 2’s up” as well as handing out cardstock fans that doubled as advertisements for his new album, B.O.A.T.S. II: Me Time (2013) on the hot afternoon.

We moved on from 2 Chainz to see French indie dance-rock band Phoenix, one of the acts I was most excited for that weekend.  Their 2009 release Wolfgang Amadeus Phoenix includes some of my favorite songs in their catalog, and I was happy to hear a set that consisted mostly of songs from that album and their most recent album, Bankrupt! (2013).    The set was wild and full of energy, including highlights of “1901” immediately followed by a rendition of “If I Ever Feel Better” complete with Daft Punk-esque robot vocals, reminding the audience that the two groups grew out of the same collaboration back in their roots.  The set ended with an extended instrumental jam of a song played earlier in the set, “Entertainment,” where lead singer Thomas Mars ran into the audience, climbed to the top of the soundbooth, and crowdsurfed back to the stage before the band bid the crowd farewell. 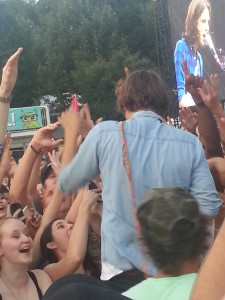 Next up was CAKE, one of my favorite bands to play on any roadtrip soundtrack.  However, I found the live performance to be underwhelming, the set becoming disjointed by frontman John McCrea’s long-winded, often senseless monologues in between songs.  That being said, it was a pleasure to hear some of my favorite hits such as “Short Skirt, Long Jacket,” “Frank Sinatra,” and CAKE’s cover of Black Sabbath’s “War Pigs,” but overall I didn’t feel like the music was the priority.  The highlight of the performance, more than any song itself, was the trumpet of Vince DiFiore, providing both melodic backgrounds and screaming leads that were better live than on the album.

The first night ended with classic rock band Journey headlining.  It was an interesting, but extremely fun performance.  Interesting, because the band is comprised entirely of members that have been together since the 80s except for one: lead singer Arnel Pineda.  What is remarkable about Pineda is that he sounds exactly like Steve Perry, Journey’s original lead singer yet looks so different.  It created a feeling of something being out of place, but the feeling was never strong enough to ruin an amazingly enjoyable performance, highlighted by hits such as “Faithfully,” “Lovin’, Touchin’, Squeezin’,” and, of course, “Don’t Stop Believin’.”  For all my love for indie rock, there is just something breathtaking about an entire crowd singing along to a song that has endured in popularity for decades.  To say it concisely, Journey can still get it.

After a perfectly sunny Friday, the skies dumped rain on us Saturday.  As one may predict with thousands upon thousands of people trampling around on the wet ground, much was turned to mud.  This made me two-for-two on festivals attended where rain poured on the festival grounds on a Saturday, after Lollapalooza 2012.  There was no way that the rain was going to ruin a good time, though; I had my rain poncho and was ready to go.

Saturday’s action for us started with Weezer, playing a set that had me reminiscing to middle school.  There was not a single song in their set that I didn’t recognize, and it was the same for most of the crowd as they sang along with frontman Rivers Cuomo to songs such as “Pork and Beans,” “Beverly Hills,” and “Say It Ain’t So.”  After a brief retreat to the cover of trees where we caught some of The Black Lips’ set (with a sound similar to blues-rock revivalists Black Keys to go along with the similar name), we returned to the rain to catch Arctic Monkey’s set, one of my favorites of the weekend.  I’ll be the first to admit that it’s taken me entirely way too long to get on board their fanbase; I only started listening to them intently with their September 6, 2013 release of AM.  Consider this an apology to younger me as I say that they were one of my favorite acts of the weekend, with much of their performance coming from the current record (including opener “Do I Wanna Know?” and closer “R U Mine?”), but also reaching back to older hits I had discovered since listening to AM such as “I Bet You Look Good on the Dancefloor.”

From Arctic Monkeys, we made the journey to Imagine Dragons, who drew as large a crowd I saw for a non-headliner even though they were playing opposite Tegan & Sara, a fine band and great live act in their own right.  Although I was quite looking forward to their set, it fell kind of flat for me; their execution was great, but the songs themselves just didn’t seem to be written with a live performance in mind.  You might say that it all sounded vanilla.  There was one notable exception, however, with their performance of dubstep/alternative rock crossover hit “Radioactive.”  The wide range of skills of the band was on full demonstration as they deviated completely from the recorded version of the song to play a long percussion-and synth jam as a bridge.  One member of the five-piece band played the synth line while all of the others played various drums across the stage to create one of the best live experiences I’ve had.  Outside of the elation in the moment, it just left me wondering where that energy was in the rest of their set, however.

After Imagine Dragons, we caught parts of sets from Yeah Yeah Yeahs and Kendrick Lamar before going early to the main stage to guarantee we were as close to the stage as possible for Red Hot Chili Peppers.  It was the best choice imaginable, as Red Hot Chili Peppers are the best live act I’ve seen.  Not only do they have a large fanbase (which means an amazing crowd experience) and a giant catalog of hits (guaranteeing that the audience will always be jamming out), but the band members have such eccentric personalities (looking at Flea, especially) that you’re never going to see the same show twice from them.  This is doubly true because they will play instrumental, improvisational jams between most songs.  And these are complicated improvs; changing keys, changing tempos, nothing vanilla.  It really shows the familiarity of the band with each other, and their virtuosity on their instruments.  Because of all of this, you could see them play an identical setlist at two shows and have a completely new experience each time.  There are too many songs from them that I love that they played to list them all, so I shall instead give a simple image of how much fun the show was: to start the encore, Flea did a walking handstand across the stage.

Simply put, this is an amazing festival.  Two days, three stages with quality, well-known acts always performing for cheap is not a deal that any college student should pass up.  If you were dedicated enough to read this full post instead of just skipping down to the end, you saw all of the bands that I listed and know that there are some huge names there, even in the early day slots.  And all of them on a two-day, early bird ticket cost me $90.  Cost still isn’t prohibitive for a two-day pass after early bird: $110.

The main way the festival can improve in my eyes is gaining more space.  Piedmont Park is much larger than the portion of it that was being used.  I loved the number of stages and their proximity to each other, so I’m not hoping for a change there; the three-stage experience with all of the quality acts made the festival still be an intimate experience rather than a hurried sampling.  I think that more space would be beneficial for food vendors and restrooms.  Lines for both of these were prohibitively long, and so adding more space solely for these purposes would greatly boost the festival.

Negatives aside, this festival can’t be beat coming from Vandy during the schoolyear.  Atlanta is 3.5 hours away without traffic and doing the speed limit (I suggest leaving after Nashville rush hour to get there without traffic concerns), and is very cheap on MegaBus if you don’t have a car.  If you’re looking for a cheap festival to spend a weekend away from campus, there is no reason not to go next year.  I’m so glad I decided to go check it out this time around.