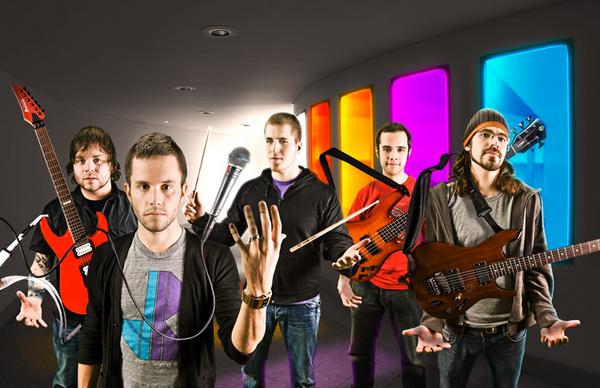 Between the Buried and Me, probably the best progressive metal band around today.

I have a fairly eclectic taste in music, and it shows when I think about my five favorite artists.  Four of those are Rush, Red Hot Chili Peppers, The Beatles and (the most recent addition) Kanye West.  All revered throughout their community of contemporaries and listeners, all well-known to the general public.

The fifth artist?  Between the Buried and Me.  Never heard of them?  Not surprising, seeing as their genre is progressive death metal.

At first, the screaming and low, rumbling, distorted guitars were an instant turnoff.  They are for most people, probably.  I lumped the band with all other death metal acts, which I perceived to have lyrics that were too angry and music that was too bulky.  My friend Collin Shapiro continued to expose me to their music, showing me the instrumental parts–which were admittedly interesting–but I simply would not bite.  As soon as the screaming started, as it does 1:25 into “Prequel to the Sequel,” I was done. 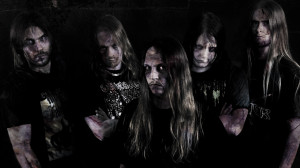 This is what you probably think of when you think of death metal.

Slowly, though, the musician in me grew more and more intrigued by the complexity and beauty of the riffs, the infinitely challenging drum parts, and particularly the melodic bass lines of Dan Briggs, who I actually had a chance to meet in April.  As I heard the band more and more (Collin was my ride to high school during senior year and played them in the car all the time), I began to develop scream tolerance.  Tommy Rogers’ growls and shrieks faded from prominence and joined the greater tapestry painted by the songs.  And all of a sudden, the tapestry was beautiful.  The first time I truly came to appreciate BTBAM (as they are called by fans) was when I listened all the way through their breakthrough album, Colors, released in 2007.  The album is 65 minutes of nonstop music and features an incredibly wide range of musical styles: a soft piano intro, brutal deathcore, Middle Eastern beats, jazzy interludes, even a saloon hoedown and a polka section.  I found it incredible that the band could incorporate that many influences into a coherent symphony while maintaining their identity as a progressive metal act.  I’ve been a huge fan ever since, sucking up their 2009 release The Great Misdirect with gusto and even using my position as a summer camp counselor to indoctrinate my campers with Colors (amazingly, in just eight weeks I got them to love it).

This past Friday at Cannery Ballroom, though, I finally saw Between the Buried and Me play live.  I had attempted to see them in 2011 and this past February but it didn’t work out.  This time, I wasn’t letting the opportunity slip through my fingers.  Adding to the appeal of the show was my knowledge that the band would be playing their widely acclaimed, most recent release, The Parallax II: Future Sequence, front to back.  The album tells the story of two God-like beings living billions of lightyears apart but sharing a soul, and their journey across space to meet each other and thereby bring about the destruction of the universe, a “goodbye to everything.”  As silly as that story sounds (and it was made crazier by the guy in the mosh pit wearing a BTBAM flight suit that came with the album pre-order package), the music on this album is nothing short of mind-blowing.  The heavy parts are heavier than ever before, the lighter parts incorporate lots of jazz and blues elements, and the band even experiments with electronic sounds.  The two most notable traits of the music, however, are Tommy Rogers’ increased singing and the overall cohesion of the twelve songs.  There isn’t as much musical variation as can be found on Colors, but Future Sequence is far more melodic, more catchy, and represents a major stylistic step forward for the band.  Rogers has a powerful tenor when he isn’t screaming, and it carries several of the songs.  Highlights of the album include “Astral Body,” “Telos,” and “Silent Flight Parliament,” the last of which is a fifteen-minute-long beast of a penultimate track.  Check out the music video for “Astral Body”: crazy and spacey, but visually and audibly stunning, and it’s a solid representation of their style on the album.

Three bands opened for BTBAM on Friday: The Safety Fire, The Contortionist, and The Faceless, all of them progressive metal bands, all of them good and well-supported by the crowd, but most people were clearly there for Between the Buried and Me, and for good reason.  Their performance was the best display of musicianship i’ve ever seen.  The band was so tight, the music so precisely performed despite its innumerable complexities in timing and key signature.  On top of the record-quality playing, BTBAM brought tons of energy to the set, no doubt aided by the rabid crowd doing its best to dance to the constantly shifting beat (and maintaining a frenetic mosh pit that I joined a couple of times).  Tommy Rogers was outstanding as the frontman; whether he was singing and playing his keyboard or growling into the mic and gesticulating wildly with his free hand, he had his finger on the pulse of the audience, which is hard to do when your band is essentially playing a seventy-five minute set with minimal pauses.  Things got particularly wild when they closed with an encore of “White Walls,” considered by many to be the best track off of Colors.  The song is fifteen minutes long, opens with an epic riff and drum beat, gets quiet in the middle, and closes with an epic guitar solo.  And when Rogers screamed “WHITE WALLS,” everyone in attendance added their shouts to the fray.

If you know me, you know that Rush is my favorite band in the world, that I’ve seen them play live three times, and that I think they are the best live act in rock music.  After Friday, though, none of those three concerts is the best I have ever attended.  Between the Buried and Me was, like the immaculate album they played in its entirely, out of this world. 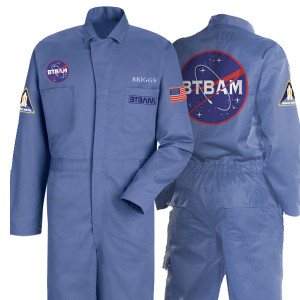 With the official BTBAM flight suit and the band’s electrifying live set, you are cleared to blast off into space.

I’ll understand if you don’t like their music, but please give it at least one go.  Maybe they’ll eventually join your top five artists of all time.  Maybe you’ll develop scream tolerance; maybe you won’t.  But regardless of your musical taste, there is no denying that these five men are possibly the most talented instrumentalists and composers around today.

*Remember to tune into The VU Backstage on Sundays at 9pm!