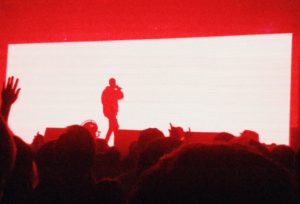 Vanderbilt’s annual fall concert has traditionally been headlined by at least one hip-hop act. Last year’s lineup of The Band Perry and Third Eye Blind broke this trend, leading to a confused and disinterested student body. Music Board this year had the task of bringing the crowd back to Memorial Gym. Given the full floor and general campus excitement, it seems like Big Sean and A$AP Ferg accomplished just that.

As the audience entered Memorial Gym, those who bought or scalped a ticket for the floor were excited to dance and mosh in front of the stage. This idea was impeded by the presence of chairs in “the pit.” At almost any other venue, this performance would have been accompanied by a moshing crowd. The unfortunate placing of chairs sapped some of the entertainment of going to a rap show. Despite our disappointment, we all took our seats.

A$AP Ferg arrived on stage unceremoniously leading to a few awkward moments before the entire crowd realized that the member of A$AP Mob was about to perform. Ferg most recently released Always Strive and Prosper, a disappointing follow-up to the Trap success, Trap Lord. The first half of the set focused on cuts from this album like “Hungry Ham” and “Let It Bang.” These tracks never struck a chord with me, but the energy and flow Ferg demonstrated on stage were enough to elevate the tracks to tolerable. Marty Baller was introduced with a performance of one of his tracks and a set long follow-up role as hype man. The set eventually transitioned towards Trap Lord with rowdy performances of “Dump Dump” and “Work.” By capping the show with “New Level,” Ferg assured that he had covered his hits.

A brief intermission led to the sudden beginnings of “Paradise” and the appearance of Big Sean. Big Sean set a positive tone for his performance by opening with one of the only tracks where he demonstrates above average rapping. Unlike Ferg’s DJ only set, Big Sean brought out live drums, keyboards, and visuals to add a sense of authenticity to his show. Solo hits like “All Your Fault” and “Dance (A$$)” were mixed with his numerous G.O.O.D. Music guest verses keeping the crowd alive until closing up with “One Man Can Change the World” and “Blessings.” Almost immediately, the crowd began to leave instead of chanting for an encore (potentially due to the lack of energy caused by the seating situation). Regardless, Big Sean came out again for his guest verse on “All Me” by Drake. The crowd was ignited and began hopping onto the chairs as if to say that for one song we would have the excitement of a typical rap show. For the brief moments where security didn’t force students to get down, we did.