This past weekend, Nashville had the pleasure of hosting BJ The Chicago Kid on his 1123 tour at Exit/In. On his tour, BJ was accompanied by Bryant Taylorr, KAMAUU, and Rayana Jay, three fellow RnB artists who each put on amazing opening acts that had the crowd mesmerized the entire time. Bryant Taylorr, a Nashville native, performed songs of his latest EP Juice, which featured his RnB vocals over spacy trap beats. KAMAUU, the second opening act, is a Brooklyn based singer and rapper whose music combines traditional hip-hop and RnB with African culture and sounds. Rayana Jay, an RnB/neo-soul artist, was the last opening act and played songs off of her last album Love Me Like. Personally, my favorite opener was KAMAUU. The first thing he did before he began his set was have the audience to take a couple deep breaths while a beautiful atmospheric intro track played in the background. This set a relaxing tone for the rest of the set, which featured some great songs from his latest EP TheKAMAUU-CASSETTE: MiXD GrēēNS, such as “Ivy” and “Clover”. He even performed his cover of the classic hit “Hey Ya” by Outkast. KAMAUU did a great job at creating audience involvement with call and response verses on songs like “GōLD”, an inspiring song about self-love. In an endearing end to his set, KAMAUU even took a group selfie with the crowd. 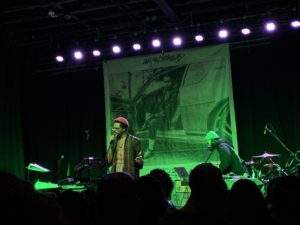 By the time BJ was ready to come out, the crowd was practically on the edge of their seats. BJ came out strong with the groovy intro track “Feel The Vibe”, which had the audience swaying and singing along from start to finish. He then followed that up with more songs off his last project, 1123, that came out in July. BJ had the crowd in the palm of his hand as he smoothly and effortlessly transitioned from exhilarating songs like “Church” to more mellow tracks like “Time Today”. BJ made a great choice in bringing out live drums and keyboard to really bring the music to life. Crisp hi-hats and bass drum kicks cut right through his smooth vocals to fill the entire venue. Halfway through his set, BJ stopped to pay homage and play songs from artists who inspired him growing up like Kanye West, Twista, and Common. BJ stopped his show at another point to talk about his connection with the audience and how the thought that there are fans out there who love his art motivates him to keep striving. He prefaced the last song he performed with a touching story of his father who had recently passed away. His parents were church choir directors in Chicago, which clearly inspired BJ’s soul/gospel style of music. He talked about how his father showed him music from Motown artists like Marvin Gaye that served as a form of escape from life in the South Side of Chicago. He then played the song “Reach” for his father while fighting back tears in an emotional end to his set. If there was one theme that resonated through the night, it was escape. The audience was there to escape everyday stress and have a good time. The artists were writing and performing songs to pour their hearts out to the world. 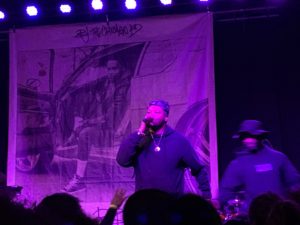 BJ The Chicago Kid on stage. Taken by Tomas Graglia.

Not only was BJ’s show spectacular, but it was also a great display of the power music has to bring people together in an air of positivity and good vibes, even for just a night. If BJ the Chicago Kid ever comes to Nashville or an area near you again, I would strongly recommend going to see him.