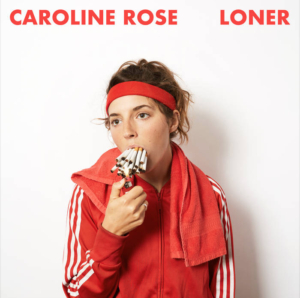 From strait-laced Americana to experimentation bordering on absurdism, Caroline Rose’s music has taken a new form since her 2014 debut I Will Not Be Afraid. Of the clear shift on her February 23rd release LONER, Rose told Rookie, “I’ve become more interested in dismantling my ego… [S]eeing that things don’t necessarily have to be as sacred as you once thought they were is liberating to me.” On this album, Rose addresses loneliness, jealousy, misogyny, and disillusionment all with a keen sense of self and biting lyricism.

LONER opens with “More Of The Same,” an alt rock-influenced song that features Rose with a voice as dry as her humor. With lyrics like, “I go to a friend of a friend’s party/Everyone’s well dressed with a perfect body/And they all have alternative haircuts and straight white teeth/But all I see is just more of the same thing”, Rose expresses her fleeting faith in things and people she once idealized.

This song fades into the bass-heavy pop anthem “Cry!”, a song that Rose explained to Consequence of Sound is about the stereotype that women “can’t handle their emotions in pressure situations.” Other tracks on this album complement Rose’s sharp critique of the feminine experience, as seen on “Cry!”‘s counterpart “Smile! AKA Schizodrift Jam 1 AKA Bikini Intro”, which is comprised solely of the lyrics “Smile/Please smile baby/Why don’t you smile?” in various edited voices. It’s incredibly creepy, and intentionally so. On “Soul No. 5”, Rose explores the absurdity of catcalling by imagining herself as the cat-caller. In an interview with Stereogum, she explained her thoughts on the phenomenon, saying, “It’s this paradox of wanting to feel nice and having someone admire you and the way that you look, but also wanting to be respected.”

Caroline Rose plays with various sounds on this album as well. Some of her alt-country roots can be heard on her rockabilly tune “Money”, as well as the deceptively cheery “Getting to Me.” Other tracks skew more pop-heavy, while “Bikini” is reminiscent of 60’s surf music. In her press materials, Rose acknowledged the wide range of styles, saying “I’d say this album was as much inspired by Justin Timberlake and Britney Spears as it was late-’70s punk”. Rose doesn’t disappoint with this hefty claim either; the synth line on LONER‘s closer “Animal” is an interpolation of that on Timberlake’s equally angsty “Cry Me a River“. The influence may explain why it’s one of my favorite tracks on the album, along with “Jeannie Becomes a Mom”.

Fans of Caroline Rose’s new work may be excited to see her in Nashville at the High Watt next Tuesday. And if your post-spring break budget is as sad as mine, you’ll be happy to learn that she will be performing a free, all-ages show at Grimey’s Record Store at 6 pm the same day. Listen to Rose’s album LONER below: