A world without musical taste is chaos.

Music is an inescapable fact of life.  It streams from our computers like a waterfall; it fills the empty space in our bars and restaurants; it augments the visual impact of television shows, movies, and advertisements.  On top of this universal presence of music, the democratization of the recording and distribution process has ensured that the variety of music available to the general public is vaster than ever before.  Yet it is precisely because of this deep and pervasive connection between music and human culture that it is necessary for you to make sense of this cacophony.  The person without a distinct musical taste risks being lost in the sonic forest, unable to converse about music with other people and unable to discern their own character.  In short, having a defined sense of what music you like is vital to becoming a contemporary man.  So, how do you develop a musical taste that keeps you both interested and interesting?  Read on to find out!

1. Expose yourself to a wide variety of genres and artists.

The telos of all music is the same: to express emotions and tell stories that words alone can’t describe.  With that in mind, it’s mind-blowing to ponder all the different forms this storytelling and heart-opening can take.  A truly contemporary music taste takes in a little bit of everything and, from that basic breadth of knowledge, can hold informed opinions and develop more specific preferences.  Not only does it build self-esteem to be able to discuss music with fans of every genre from dream pop to avant-garde jazz, but you can also find yourself getting into a style of music you haven’t before considered worthy of your attention.

To give a personal example, I was raised on classic rock and early 2000s pop music.  That was what I listened to at home, in the car, and on my primitive MP3 player.  I still love these genres, and not just for the nostalgia they provide–I knew the acts, knew their history, could sing along to them.  In short, they were comfortable to me.  So when my best friend Collin tried to get me into death metal, I was naturally averse and even a little disgusted.  Death metal was more than a departure from my normal tastes; it was a headfirst dive into growling guitars and primal screams.  But slow exposure to some of the best artists of the genre began to warm me up, and once I looked past the superficial barriers separating death metal from the mainstream and my prior preferences, I gained an appreciation for it.  Today, Between the Buried and Me is one of my favorite bands.

Now, I’m not suggesting that a plunge into such an extreme genre is necessary to develop a contemporary music taste, but death metal, like all other genres of music, has artists with a story to tell, and is worthy of at least a toe dipped in the water.  If you never even give it a listen, how are you supposed to know you don’t like it?

The best way to discover new genres to add to your pallet is to talk to friends.  Given the enormous variety of music available today and a song’s ability to build a unique connection with each individual listener, the people you know are bound to enjoy some style of music that you have not yet experienced.  Ask them what they like and they’ll give you a few songs to check out on Spotify, iTunes, or YouTube; more than likely, these songs will be standouts in their particular genre.  Of course, you then have to follow through and give the tracks a listen, but in doing so you’ll gain a basic understanding of that particular style of music.  Other great ways to build a breadth of musical knowledge include listening to streaming online radio (like WRVU) and paying attention to the music you encounter by chance on a daily basis–if you like the song playing in Starbucks or Macy’s, ask someone what it’s called and who plays it.

Being open to a constant expansion of your musical awareness in the ways described above will allow you to stay on top of current mainstream music trends while giving you the capability to discuss the virtues of most genres, thus enabling you to hold conversation with more people and making you more interesting.  In addition, you’ll gain the knowledge to select a particular genre of music to complete the ambience you’re seeking to create at a party, on a date, or at any other time.  Finally, it opens the door for you to delve more deeply into selected artists, which will prove crucial to maintaining a contemporary music taste.

2. Know the classics and hold opinions on them.

There will always be room to increase the breadth of your musical experience; it’s a fool’s errand to try to listen to every song that’s ever been written.  I doubt they have recording equipment in the jungles of Papua New Guinea, and while the tribal music there may be intriguing, it’s unlikely to appeal to a listener from a different cultural perspective.  That being said, there are some songs and artists that are absolute staples of Western culture, that maintain relevancy over time regardless of current music trends.  If you are to have a contemporary music taste, you need to know these artists and songs, and be able to form opinions about them.

In the classic film Pulp Fiction, there is a deleted scene featuring a conversation between Vincent Vega and Mia Wallace in which Mia proclaims that there are only two types of people in the world–Beatles people and Elvis people–and that, while Beatles people can like Elvis and vice versa, it’s impossible to like them equally.  This is the type of question that you have to be able to answer; both The Beatles and Elvis had a profound impact on music and popular culture that persists to this day, and therefore any adequate knowledge of music will of necessity include at least a basic knowledge of both artists.  Having an opinion on which is better only increases the depth of your thought about them, which manifests itself in your ability to make choices regarding current music because of the influence both The Beatles and Elvis have had upon all subsequent music.  You’ll also appear more sophisticated when the topic of classic music arises in conversation.

The Beatles and Elvis are, of course, not the only classic artists you’ll need to learn about.  Look for any artist who is representative of either a well-known genre or a particular time period.  Some examples of musicians meeting these criteria include Frank Sinatra, Bob Dylan, Elton John, Michael Jackson, Madonna, Pink Floyd, Nirvana, George Strait, Daft Punk, and Notorious B.I.G., among others.  When it comes to these classic artists, you’ll want to know the years when they were at their peak, a few key details of their history (particularly if these stories are pop culture references in their own right), and a handful of their most famous songs or albums.  If you learn this information and come to opinions about these cultural icons, you’ll already have a solid foundation for your contemporary music taste.

3. Pick a couple favorite artists and invest your time in them.

The classic artists should be a foundation of any cultured person’s musical taste; knowledge of them does not give you an interesting or unique musical taste, and sticking only to the legends can get boring and violates the first principle I’ve laid out, that of experiencing as wide a breadth of music as possible.  Besides, as I stated earlier, trying out an expansive variety of music will almost assuredly turn up an artist to whom you are powerfully drawn, and you will want to learn as much about them and their music as you can.  I can’t tell you which artist this will be, because the emotional basis of music ensures that your connection with any song will be intensely and utterly personal.  But it is important to find at least one or two artists with whose music you experience a stronger connection than with any other.  Not only does this give you a sincere answer to the age-old question of “who is your favorite band,” but it also allows you to encompass the artist’s songs and lives into your own personal story.

The artist to which I feel this special connection is Rush.  I’ve listened to every song they have released since their debut album in 1974, know biographical facts regarding the band’s history and each member’s life, and have seen them three times in concert.  The most important factor in my relationship with Rush is the identification I share with the lyrics they write and the music they play.  When I play a record by Rush, I often feel that it expresses feelings I could not have otherwise put into words, that Geddy Lee (the lead vocalist) is singing directly to me.  This is the feeling that you should experience when listening to your favorite artist–a deep emotional bond despite your lack of personal contact, an upbuilding through music that can singlehandedly brighten your day.  Having a favorite artist, while vital to maintaining a contemporary music taste, is also a great joy to be added to your life. 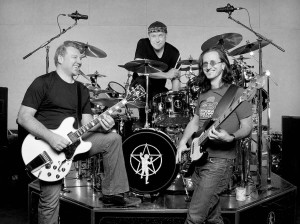 The music of Rush has been a soundtrack for my life, just one of the ways your favorite artist can build you up.

When you discover your favorite artist, listen to as many of their songs as you can find, learn the stories behind the songs and behind their lives, and be sure to see them play live at least once.  All of these actions will develop your bond with the artist and thereby develop your own character, making you more interesting and nuancing your taste in music.

Following these three steps–taking in a wide breadth of music, knowing the classics, and picking out a couple favorite artists–will help you organize the wonderful and wild world of music in which we live, and give you yet another dimension to add to your character and the meaning you attribute to life.