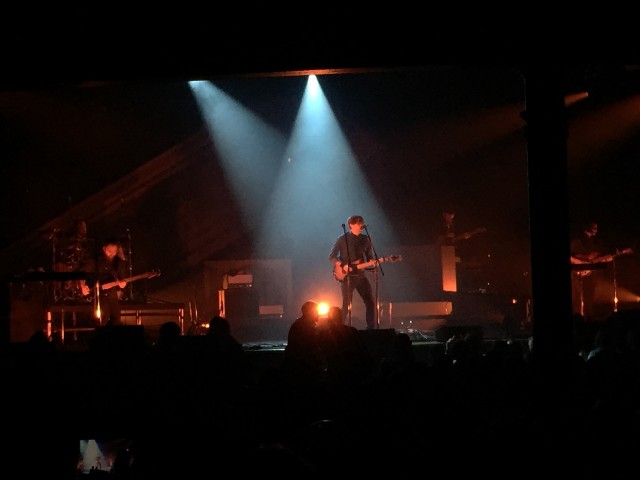 Death Cab For Cutie brought their Seattle gloom to Nashville and somehow left everyone feeling happier for hearing it.

It’s almost like Death Cab For Cutie was born to play the Ryman Auditorium. Ben Gibbard’s lapsed Catholicism resonated just as powerfully as his band’s driving, atmospheric music within the walls of the old converted church. And what better place than a church to sit for three hours and contemplate the sad, fleeting beauty of life? Hearing Gibbard’s quasi-emo crooning provided just the reality check I needed on my triumphant and terrifying road to college graduation. Yet despite the characteristic melancholy of Death Cab’s sprawling 22-song set, the show proved to be uplifting on the whole. That’s what is so special about the band: their music consistently contemplates the futility of love and the inevitability of death, only to smile in the face of its own fatalism. 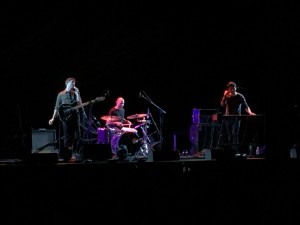 The Antlers made for an ideal opening act–melancholy, passionate, and talented.

I arrived at the Ryman and took my seat just as The Antlers, the evening’s opening act, struck up their first song. I didn’t know much about the band before last night, but after five minutes of their music I completely understood why Death Cab had pegged them for this show. The entire forty-minute set packed a subdued intensity, haunting the auditorium with ghostly reverb and aching, passionate solemnity. From the very beginning of “Doppelganger” I was transported to the band’s native Brooklyn on a cold evening, probably Halloween given the ethereal whispers of Darby Cicci’s synth and Matt Lerner’s morose expression behind the drum kit. Singer/guitarist Peter Silberman’s body heaved in time with the music as his soft voice floated like a spirit atop the wall of sound on songs like “Kettering” and “No Widows.” I don’t think I’ve ever seen a more earnest band—not a hint of humor pervaded the six songs The Antlers played. The audience was left only with a sense of having its own emptiness filled not by running from the darkness of the world, but rather by embracing it. “Putting the Dog to Sleep,” the band’s last song of the evening, felt like something out of the desolate high school dance scene in Napoleon Dynamite—the sonic manifestation of depression washed over the room like a tidal wave, but at the same time a sense of love’s persistence through the sadness provided a lift without which I probably would have curled up into a ball in my seat and never moved again.

After a fifteen minute break during which I attempted to make myself chipper in preparation for the rest of the show, the room went dark and a roar erupted from the crowd as what sounded like a snippet from an Animal Planet documentary blared over the PA. I still can’t decide the clip’s significance—perhaps the twittering bird represented flighty and evasive happiness?—but thankfully Death Cab took the stage fairly quickly and launched into “No Room In Frame,” the opener off their latest record, Kintsugi. The album’s title refers to the Japanese art of making pottery out of broken potsherds in such a fashion that the scars are proudly displayed as if they comprise the piece’s history. Ben Gibbard must have done a rare happy dance upon discovering kintsugi, because it perfectly equates to the music for which Death Cab For Cutie has become renowned: vulnerable, plaintive, and yet unabashedly showing off its sadness and creating life out of it. The show’s aesthetic successfully matched the music in this regard; all five members wore the same shade of Picasso-esque blue and were enveloped by darkness after each song, and yet their energy clearly showed that the bliss of performing was unfettered by the melancholy content of their music. Gibbard set the tone, his distinctive all-too-human voice supported by a sort of side-to-side shuffle he kept up through most of the two-hour set, and the crowd matched the power he exuded—that is to say, everyone was standing by the end of the second song but remained transfixed and mostly immobile, wrapped up in the complex emotions of the music. 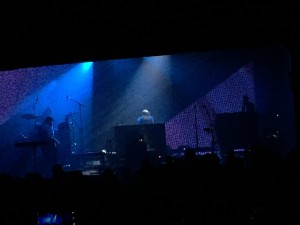 Gibbard took to the upright piano for “What Sarah Said,” his blue-shirted band disappearing in the cool lighting.

The band’s performance itself was nearly flawless. Any doubts that may have arisen out of lead guitarist Chris Walla’s departure were quickly silenced by the effectiveness of new touring members Dave Depper and Zac Rae, both of whom split time between guitars and keyboards to provide the band’s trademark ambient sound over the thudding rhythm of bassist Nick Harmer and drummer Jason McGerr. The tracks the band played off of Kintsugi provided an interesting contrast to the older songs peppered throughout the set, as the new material featured the 80s-nouveau sound currently in vogue across much of the rock world. The synths and bass in the chorus of “Black Sun” belonged in the Blade Runner soundtrack, and “Everything’s A Ceiling” brought to mind Phil Collins-led Genesis more than anything Death Cab had written before. That said, the lyrical content stayed within the band’s milieu. Some say Gibbard wrote Kintsugi as a breakup album following his divorce from Zooey Deschanel, and that sentiment shone through on songs like the longing “Little Wanderer” and the ghostly “You’ve Haunted Me All My Life.” 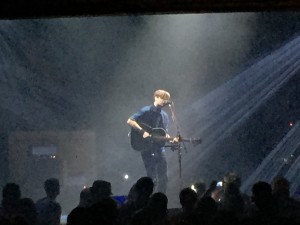 Every member of the audience would have followed Ben Gibbard into the dark.

Despite the focus on its newest record, Death Cab mixed in a healthy dose of classics spanning its seventeen-year career, eliciting a whoop of approval from the audience before just about every song. As bizarre as it was to hear people singing along to a line like “Love is watching someone die”—a lyric so representative of the band that it should appear on Gibbard’s tombstone—the whole atmosphere made sense as everyone at the Ryman came together to simultaneously mourn and celebrate the fragility of life. The passion of this revelry reached peaks in the wordless vocal melody of “Soul Meets Body,” which sounded incredible played on acoustic guitars in the Mother Church, and in the extended intro to “I Will Possess Your Heart,” wherein the audience clapped vigorously to the beat as the tuning pegs on Harmer’s bass reflected angelic beams of light into our eyes. After the latter song finished, the band left the stage and the crowd commenced pounding on the wooden pews, creating a massive rumbling that could never be created at any other venue in the country. In a way, it was the perfect way to cheer Death Cab and invite them out for the encore—more understated than raucous hollering, but somehow more powerful. And we were rewarded handsomely when Gibbard returned to the stage and, after encouraging country musicians to cover the song so “Jason can put his kids through college,” launched into the classic “I Will Follow You Into The Dark” accompanied only by his acoustic guitar. Not a voice in the crowd remained silent.

The encore featured three more songs and concluded with a rousing performance of “Transatlanticism,” which swelled with volume and intensity as McGerr pounded the drums like a gorilla and everyone else, musicians and audience members alike, lost themselves in the extended outro. Gibbard became a mythical hero as he slung his guitar across his back and led the awed crowd to the conclusion of the set, finishing with a flourish and a wave of the hand as deafening applause filled the building. And despite the depressing content of the lyrics throughout the entire show, I couldn’t help but feel unexpectedly happy. In a world of ephemeral joy that inevitably sinks into darkness and life that can’t help but die, Death Cab For Cutie succeeded in turning the melancholia into a sad smile and a determination to carry on.