Adams, TN is a brief town: home to barely 600 people and a few miles of softly rolling fields, glinting golden in the husky glow of the late autumn sun. Signs for corn mazes and freshly harvested clover honey adorn the narrowly winding US 41–leading a silver Chevy, stereo blasting James Blake’s “Retrograde,” to the Red River Campground, where the one rule of the weekend is to fly free.

This past weekend hosted the inaugural Fly Free Festival, a festival aiming to de-Roo the middle Tennessee music & arts community. Bonnaroo, though it is a world of magic, has grown to such incredible proportions that it has lost the intimacy and mindfulness of the original festival mission–it is, essentially, a temporary urbanity. Fly Free was the type of festival where an unlocked car did not mean property theft and falling asleep under the stars did not pose an invitation for violence.

Fly Free provided a safe space for a few hundred people to dance, meditate, sing, hug, stargaze, and create together. From fire-spinning pavilions to permaculture classes to sustainable food vendors, the spirit of respect emanated throughout the little village. This festival was truly it’s own micro-community. 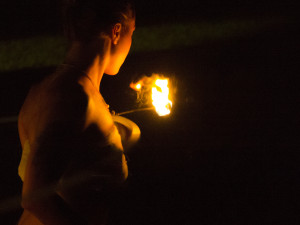 With the foundation of creative community, a very talented line-up made for a dynamic three days of twirling and singing in the fields. Nashville favorites, Moon Taxi, kickstarted the weekend with an awesome set, culminating in their characteristically intense improvisation and a shoeless keyboardist (Wes Bailey is a god among men). After half an hour of the most energizing jamming this side of a Pretty Lights encore, we disembarked the moon taxi and danced into the wee hours with RJD2, a delightfully experimental trip hop adventure from Philly. 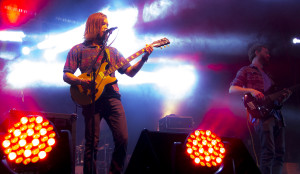 Tennessee has yet to realize that it’s autumn, which made for a warm and sunny Saturday that was perfect for lazing in the grass, eating steak-on-a-stick, and watching dozens of dancers hula-hooping to the Morning Teleportation set. Known for station favorite “Expanding Anyway,” the psychedelic rock group hails from Bowling Green, KY and is a staple of the Southeast club circuit. Local favorites, JEFF the Brotherhood, kept the energy raging with a blaring set of garage punk that demands rowdiness.

Aside from indie-dance behemoths like Rubblebucket and Cloud Cult, the festival showcased the talents of lesser-known DJ’s, jam bands, and several politically conscientious funk bands. Nestled in the village of craftsmen and food vendors, was the Nimbus stage–home to morning yoga classes, the Silent Disco, and bellydancers. Along the paths through the village were massage-trains, oxidized water vendors, and jaw-droppingly talented artists. The KYND Clothing Company had an extensive display of beautifully crafted bamboo sunglasses, handmade screenprinted shirts, and solar-charged wristbands. All of their products are sustainably made and their warm attitude toward the festival-goers really exemplified the true mission of the festival vendor: to spread the message of ethical production.

“We want to do everything in our power to do good in this world, and be a company that offers hope and style amidst industry giants that often choose profits over people and our environment.”

Sunday wound down with an entrancing set by The Polish Ambassador and, finally, Papadosio gently bid us farewell with their incredible amalgamation of prog rock, psychedelic and funk-folk. Overall, Fly Free Festival had a very successful first-run that, hopefully, has laid the foundation for a recurrence. There was no better way to spend fall break than flying free on the banks of the Red River.