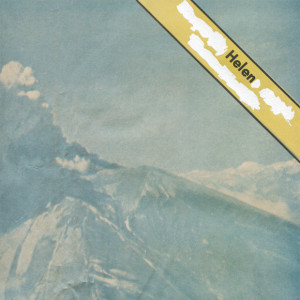 Just released earlier this month on Chicago-based indie stalwart Kranky, The Original Faces by the three-piece (4-piece?) Helen has quietly and self-assuredly proven itself on multiple listens as a high quality full-length relatively out of nowhere. Attention to the band was primarily due to its inclusion of Liz Harris in the roster, whose folk project Grouper has attracted considerable critical acclaim and admiration for its sparse intimacy and thrilling experimentation. This was certainly the case for me; when I heard that she had a “pop” band putting out an album I was immediately all in.

I was not disappointed in any regard by what I heard, which was probably one of my favorite musical things ever: golden, honest-to-god pop melodies somewhat buried beneath noise, just deep enough so that you can still pick them out. The Original Faces shows off a musical quality that makes me love Atlanta trap music so much, the presence of harmony and melody in conjunction with harder hitting, dirtier stuff like bass-heavy drum pads or in Helen’s case, effects-laden guitars. Helen routinely chalks up hit after hit over the course of The Original Faces, reaching a euphoric peak on the album’s stunner, “Allison”. The chorus on this track is just genius, angelic choir-type stuff, right up there with Pimp C’s chorus work on “Protect & Serve”. (That is Pimp singing right? The man was a choir singer, and said he sung Italian sonnets and spirituals so, I wanna believe it’s him.)

I don’t want to get too much into talking about Grouper since this mostly a piece on an entirely different band, but I will say that Liz Harris’s other project has a definite influence. I would bet that she plays no small role in the songwriting process for Helen (though I wanna avoid stating Helen is “her band” or anything assumptive like that). There’s the introspective, at times wistful quality in Helen’s songs, with lyrics sung in a manner that tries to stretch them into eternity. Then there’s the gutted-out outro on “Felt This Way” which feels very much like a Grouper track. But enough about Grouper, I need to mention Harris’ bandmates, Scott Simmons and Jed Bindeman, who (now I’m going to assume here) make up Helen’s rhythm section. And what a rhythm section it is. Their talents are fully on display in tracks like “Dying All The Time” with its bass swinging back and forth accompanied by insistent drums while “Grace” serves as a glorious example of a guitar song that actually makes the bass and drumming its focus.

The strength of Helen’s rhythm sections calls to mind other indie rock bands with towering rhythm sections, such as Viet Cong and by extension, Women. I’m looking forward to hearing more from this outfit, but for now we can all make ourselves busy listening to The Original Faces and waiting on that Thugger album to drop.