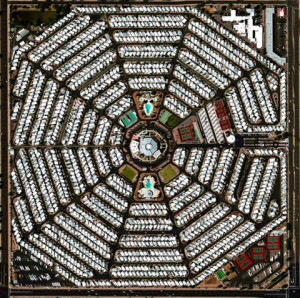 Over the past month, Modest Mouse has released two singles off of their highly anticipated upcoming album, Strangers to Ourselves. It has been nearly eight years since the release of their last album, We Were Dead Before the Ship Even Sank, which was either Modest Mouse’s best album or worse album depending on who you ask. Naturally, there was a lot of excitement and anxiety over the direction Modest Mouse would take with this next album, which warrants us to take a closer look at the releases.

Released in mid-December of 2014, “Lampshades on Fire” set its allegiance to 2007’s We Were Dead Before the Ship Even Sank with Isaac Brock’s vocal scatting to start of the track–a drastic departure from earlier albums 1997’s The Lonesome Crowded West and 1996’s This is a Long Drive for Someone With Nothing To Think About, both re-released earlier in 2014 to hype up this upcoming album.  A slick drum lead-in breaks the song out into a flurry of activity, headed by Isaac Brock’s vocals and accompanied by a booming bass, pulsing drum-beat, and a guitar wailing and bending notes that has characterized Modest Mouse’s sound since the release of “Dramamine” about 20 years ago. Brock’s vocals during the verse are as passionate as ever. This brings us to our next point: lyrics. Although musically Modest Mouse has gone through many stylistic changes, Isaac Brock’s promise to deliver lyrics with substance has been consistent through the decades. The opening verse leads us to believe this song will be about a common Modest Mouse motif, the absurdity of life and being trapped in meaningless repetition: “Well the lampshades on fire when the lights go out/ The room lit up and we ran about/ Well this is what I really call a party now/ Packed up our cars, move to the next town”. However, as the song goes we find that “Lampshades on Fire” is not simply a diagnoses of our instant-gratification seeking culture, but also a warning as to how this can impact the world we live in: “Spend some time to float in outer space/ Find another planet, make the same mistakes/ Our mind’s all shattered when we come and go/ Hoping for the scientists to find another globe”. This environmentalist motif seems to be further supported when looking at the second single release, “Coyotes”, which is discussed further below.

Overall, “Lampshades on Fire” felt very safe–as if the intention was for people to feel instant appeal towards this new album from this song’s resemblance to We Were Dead Before the Ship Even Sank. However, Brock states in Pitchfork’s documentary The Lonesome Crowded West that he believes in making each album different from its predecessors, so if he is true to his word we should get some fresher content from the rest of Strangers to Ourselves.

ndIn “Coyotes” Brock comes to us with intimacy reminiscent of a track like “Little Motel”.  The song was released earlier this week on January 20th along with a music video, which is apparently based on a true story of a coyote hopping onto train in Portland. The song opens with a delicate guitar line which is promptly joined by Brock’s vocals and a simple drumbeat, where Brock’s light and bouncy singing actually reminds you of a coyote tip-toeing in the snow after dark. In this song he laments the plight of the coyotes, who are forced to live in nature devoid of the vibrancy it once had: “Coyotes tip-toe in the snow after dark/ At home with the ghosts in the national parks”. Brock points out that it is mankind’s doing, on account of its ruthless behavior: “Mankind’s behavin’ like some serial killers”. The light, but jerky waltz is occasionally accompanied by an electric guitar riff or banjo line, but then it suddenly breaks out into a fluid and open chorus, where Brock’s vocals almost get lost in a sea of ambient guitars and background vocals. The process repeats all over again, and after the second chorus, the song breaks down into an instrumental section, coinciding to the point in the music video where the coyote closes its eyes and heartbreakingly reminisces on being able to roam freely through the green forests surrounding Portland.  The third chorus flows into an anthemic section dense with electric guitar, synth, and choral singing: “And we say we’re in love with all of it/And we say we’re in love with everything/ And we say, what can we say?”. Here Brock points out the hypocrisy of our attitudes towards nature, simultaneously destroying nature and saying how “we’re in love with all of it”.  Far less intricate than “Lampshades on Fire”, I feel like this song was able to do a lot more with a lot less. The chorus and outro are particularly captivating musically in how they convey the emotion and message of the song.

Seeing the common motif of man’s apathetic/irresponsible attitude and self-indulgence destroying the world around us, I am excited to see what the rest of the album has in store. What made earlier albums like The Moon and Antarctica or The Lonesome Crowded West so enthralling and captivating was not just the musical ingenuity of each album, but also how each album seems to tackle common ideas and themes that can be incredibly insightful. I am hopeful that this next album can pick up that trend. Musically, I have yet to hear anything significantly different from the rest of Modest Mouse’s 20 year discography, so we will have to wait and see if they bring out any new ideas on March 3rd when Strangers to Ourselves is scheduled to come out.