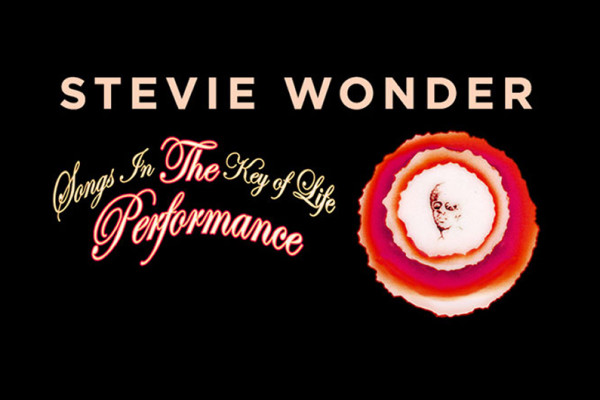 When my mom found out Stevie Wonder was coming to Nashville, she wanted me to go so badly that she helped me pay for the tickets.  Not that I wouldn’t have tried to go anyways.  Stevie is 64 years old, so who knows how long he’ll be touring?  And word was that he would be playing his seminal 1976 album Songs in the Key of Life in full.

From the moment I found my seat at Bridgestone Arena I knew the show was going to be an extravagant production.  On the stage sat two drum kits, two percussion arrays, seats for a ten-piece string ensemble and six-piece brass section, risers for a horde of backing vocalists, several keyboards and guitars waiting to be played, and of course Stevie’s setup front and center: his signature Hohner Clavinet and a Yamaha electric grand piano. 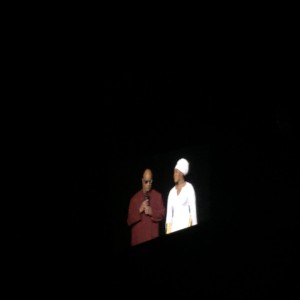 Stevie with India Arie, who sang on several songs with him.

Around 8:20 the arena went dark and a roar erupted from the assembled concertgoers as Mr. Wonder strolled onto the stage on the arm of soul singer India Arie, his featured guest on this tour.  Despite his age and a further receded hairline, his face still shone with youthful energy and his smile was infectious.  Stevie entertained us with a few jokes, poking fun at his own blindness, before telling us that his daughter Aisha was celebrating her birthday and we would all be celebrating with her at some point.  As it turned out, that moment came at the beginning of the second act, when Aisha FaceTimed into the show and her dad broke out “Isn’t She Lovely”–a song he wrote about her birth 40 years ago.*

After telling the audience that this would be a night dedicated to loving every human being, Stevie and his massive band launched into “Love’s in Need of Love Today,” the opening track off Songs in the Key of Life.  Just as he has not lost his exuberance and boyish looks, his voice remains as pristine as it was in the 1970s.  If I closed my eyes and let the music wash over my ears, I was almost convinced that I had been transported four decades into the past.  Stevie’s songs remain as relevant today as they were back then, whether they be timeless pop sensations like “Sir Duke” and “I Wish”–which he played back to back in the first act–or the passionate cries for racial equality found in “Village Ghetto Land” and “Black Man.”  Blind since birth, Stevie must have a unique concept of race in America, and I found myself thinking about this as the show proceeded.  Paradoxically, the blind man is the most able to see past the division of skin color, so it must make little sense to Stevie Wonder that such a trivial physical trait can interfere with love of all people.  I’d love to have a conversation with him about how his racial consciousness developed, and how he integrated it in such a positive way into his music. 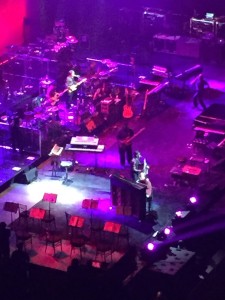 Stevie breaks it down on the upright piano.

The performance was laced with emotion throughout.  Stevie gave us a visual representation of “Joy Inside My Tears,” wiping his eyes dry for over a minute to raucous cheering after the song concluded.  He interacted ecstatically with his backing vocalists, playing call-and-response with them leading into “Summer Soft.”  And every song was punctuated with a patented Stevie Wonder happy-go-lucky grin.  There were ups and downs in tempo and tone, as befits the performance of an entire album, but as a result the whole performance felt tied together in a way that transcended a mere sequence of songs.  The themes of Songs in the Key of Life–celebration of life’s beauty and hope for a future where love replaces hate–filled the soul of every listener for an astounding four hours of music.

Among the highlights of the show was a three-song set Stevie performed on a sort of clavinet-guitar hybrid called a harpejji.  I had never seen the instrument before but he played it as well as he plays any of the other dozen instruments he’s mastered.  From a jazzy cover of “Yesterday,” he proceeded to tease the audience with “Tequila” before paying homage to Michael Jackson with “The Way You Make Me Feel,” which he sang as well as Jackson ever did.  After “If It’s Magic,” he returned to his keyboard. 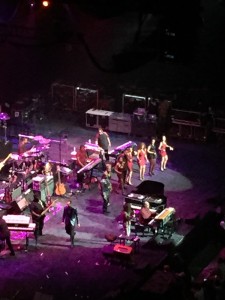 That’s Steven Tyler next to Stevie. Another typical Nashville surprise!

Towards the end of the show, Stevie assumed his alter ego DJ Tick Tick Boom and, after a few technical difficulties, performed sections of some of his non-Songs in the Key of Life hits, including “Living in the City,” “Higher Ground,” and “Signed, Sealed, Delivered.”  Afterwards, the audience received a pleasant surprise as Steven Tyler came onstage to join Stevie in the obligatory encore performance of “Superstition,” which sounded massive with fifty people playing and singing at the same time.  By this point, it was past midnight and some of the older folks had left the building, as it was presumably past their bedtime.  But those of us who stayed to the finish danced and sang our way home, the famous clavinet riff still ringing in our ears.

All told, the Songs in the Key of Life concert proved that even as he ages, Stevie Wonder remains a prodigious singer and instrumentalist with the stage presence and sense of humor to captivate tens of thousands of onlookers.  His music holds up across forty years, and will continue to do so for the next forty years and the forty after that.

*Author’s note: Upon further investigation I discovered that Aisha was actually born on February 2nd.  But the song is amazing, so who cares what story Stevie contrived to play it?