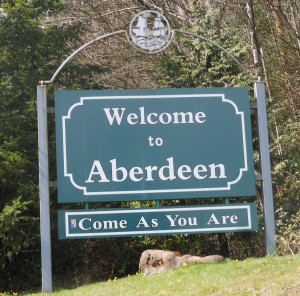 Kurt Cobain, the famed frontman of Nirvana, grew up in Aberdeen Washington. In interviews, Cobain rarely mentioned the city, sometimes saying things like, “In Aberdeen, I hated my best friends with a passion, because they were idiots.” Later recounting his childhood, Cobain reflected on Aberdeen as “a depressed and dying logging town.”

Aberdeen has been nicknamed “The Hellhole of the Pacific” because of its high murder rate and, as its high population of blue-collar workers suggests, depends heavily on the fishing and logging industries to support its economy.  Of course there’s nothing wrong with a little manual labor but in combination with Washington’s cold, wet climate, nothing about Aberdeen seems very appealing.

On February 20, 2014 the mayor of this small town declared a new holiday, “Kurt Cobain Day,” notably similar to a nearby town’s adoption of “Nirvana Day” on April 10th.

In honor of this new holiday, Aberdeen has unveiled a larger-than-life statue of a crying Kurt Cobain in the city’s Museum of History.  Although the statue has been around for around 20 years, the city has refused to display it up until now.  The mayor of Aberdeen has been quoted as hoping the city would become “as big as Graceland” 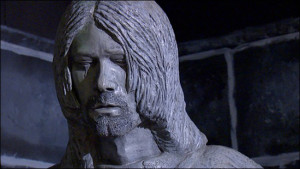 This is certainly not the first time a musician from a small city has been heavily revered by their hometown; making an otherwise unremarkable location into a tourist trap.  The problem is that a good portion of Aberdeen’s residents have no interest in Cobain.  Unlike artists such as John Lennon, Elvis Presley, and Johnny Cash, who are often treated by their hometowns as gallant purveyors of wisdom, happiness, and truth, Cobain is seen by many as a destructive vagabond.  He was arrested for vandalizing vehicles, never held a steady job, was said to have lived under a bridge for a bit of time, and heavily explored the world of drugs. On top of that, he never credited Aberdeen as a source of inspiration for his ground-breaking movement in music.  On the contrary, when asked about it Kurt Cobain continued to paint an ugly image of his hometown throughout his entire life.

Can this small population, having either indifference or bitter feelings towards Kurt, succeed in forging a respectable staple of rock and roll tourism? A boom in tourism could surely help out a town that depends on two industries with flinching levels of relevancy.  Perhaps if the city had not immediately dissociated itself from Cobain after his death they would have reaped a more significant benefit. However, putting up a creepy statue and declaring a hollow holiday twenty years after Kurt’s death might not sell as well as Aberdeen is hoping.