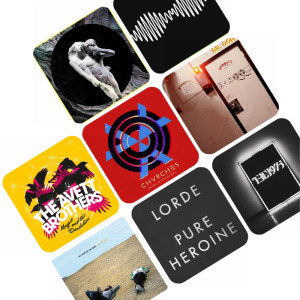 2013 has been a year of marvelous releases.  A few personal favorites have been Kanye’s Yeezus, James Blake’s Overgrown, Streetlight Manifesto’s The Hands That Thieve, and Daft Punk’s triumphant return with Random Access Memories, but these don’t even begin to comprise a complete highlight list.  Coming up with my list of Top Albums for the year is going to be an intensive process and I’m looking forward to it; in between debating the merits of different albums, I get to listen to all of them again.  It’s going to be something truly magical.  A much easier list to make, though, is my favorite albums of the semester.  While a lot of the heavy hitters for the year were released outside of that time period, there’s a great amount of quality for just these ~3 months.  In my opinion, these were the cream of the crop (presented in alphabetical order by artist).

I’ve actually already summed up my thoughts on this album in a previous blog entry.  You can read it here if you’re so inclined.  If you want a shorter review, here ya go: this isn’t your Suburbs, Neon Bible, or Funeral Arcade Fire, taking elements from all of those albums and wrapping them in a sound that is largely dark disco.  Highlight tracks include “Reflektor,” “Here Comes The Night Time,” and “It’s Never Over (Hey Orpheus).”

I’ve screwed up for all of these years; I’ll admit it.  Why, you ask?  Because AM was the first Arctic Monkeys album that I listened to front-to-back.  Fortunately, it made me go look at their back catalogue and find some great stuff there that I hadn’t grown into previously, and upgraded them to a can’t-miss artist on my trip to Music Midtown in Atlanta.  Highlight tracks include “Do I Wanna Know?” “R U Mine?” and “Why’d You Only Call Me When You’re High?” (pretty heavy on the questions), and the album as a whole sounds like Black Keys but (dare I say) better.

The Avett Brothers – Magpie and the Dandelion

If you like Mumford & Sons or Lumineers or Phillip Phillips and haven’t heard of The Avett Brothers, you’re doing it wrong (principally because they’ve been recording longer than those larger folk rock names).  Magpie and the Dandelion is an easy, folky listen, perhaps a little more poppy than previous Avett Brothers records (a more accessible product due to the pop revival of folk, perhaps?).  One of my favorite things on an album is a great start, and tracks 1-4 on Magpie are flawless in this regard.  “Another is Waiting” (the last in that opening quartet I mentioned) is particularly great and also representative of the pop lean that I felt, with vocal melodies in the verse closely resembling Atlas Genius’s indie pop hit “Trojans.”

CHVRCHES –The Bones of What You Believe

Lauren Mayberry, Iain Cook, and Martin Doherty make up Scottish synthpop group CHVRCHES (pronounced “churches”; think of the V as a stylized U), and Bones is their debut album.  The album starts with a strong base composed of previously released single/EP tracks “The Mother We Share,” “Recover,” “Gun,” and “Lies,” but in many ways the rest of the album exceeds the danceability and fun of those ones.  My personal favorite is “Tether.”  It starts slow and then breaks down into a complete and utter jam of synths and modulated vocals.  If you have tickets to their sold-out show at Exit/In on Dec. 1, see you there.  If you want an in-depth review of the album, my fellow staff writer Nick Kline gave his thoughts on it here.

This is just a perfect mix of laid-back but jam-ready.  I don’t really know how to describe Dr. Dog well.  They’re a little bit folky, a little bit psychedelic, a little bit baroque pop, a lot a bit fun to listen to.  The album basically sounds like it could be straight out of the 60’s.  If you were raised on Bob Dylan and Cream like I was, you’re just going to dig the sounds on this record.  The personal favorite is “Broken Heart.”  I just love the simplicity of the chorus

The Head and the Heart – Let’s Be Still

My first exposure to The Head and the Heart was at my first music festival, Lollapalooza 2012, and they were one of the clear musical highlights on a weekend that ended up being more about growing relationships than seeing bands for me.  That is to say, I have a soft spot for them, and Let’s Be Still didn’t disappoint even though I have that bias to judge them against.  Another Americana band in the vein of a Mumford & Sons or Avett Brothers, Let’s Be Still doesn’t strike as a complex or grandiose album.  What makes it great in my eyes is that it is executed so well; singers and instruments are balanced, the arrangements set songs up for success, and the songs have variety between them (while the current folk-pop revival can start to sound like the same repeated song over the course of an album).  Particularly great are the lead-off track, “Homecoming Heroes,” and the lead single, “Shake.”

You know “Royals.”  You love it (even if you’re getting tired of it getting overplayed, you still love it.  It’s more than a fad song).  By induction, you love the rest of Pure Heroine.  While “Royals” is undoubtedly the best track on here, it is far from the only standout on the album, with “Tennis Court” and “Teams” also being particularly noteworthy.  At its heart, Pure Heroine is pure pop, and there’s nothing wrong with that; a great album doesn’t have to be a Pet Sounds, it can be there purely for the enjoyment aspect.  There are some different sounds than your American label standard-produced pop, and that particularly excites me; while its not WRVU’s format, I wouldn’t mind to see Top 40 radio be sent in a different direction than the current “four-on-the-floor, dancey synths, wait for the drop” model, and I hope that as Lorde grows into her sound she can help spearhead something having already made that crossover success.

This is another one I already wrote a review for.  The short and heavy: The 1975’s self-titled debut—heavy on the drums, funky guitars, and synths—could be the soundtrack for a John Hughes movie (if you’re not studious of directors’ works, he’s the guy that did The Breakfast Club).  Songs on the album deal with coming-of-age, especially through the motifs of drugs and sex.  Although most songs on the album sound like they could be singles, the singles that have been drawn from the album so far comprise a good list of highlights: “The City,” “Chocolate,” “Sex,” and “Girls,” all have a serious arena or dance floor sound, if not both.

And there you have it.  My favorite releases of the semester.  It’ll be interesting for me to see where I end up ranking them within the context of the whole year of releases when it’s all said and done.  I’ve compiled all of the above albums into a Spotify playlist.  Listen to it straight-through, sample here and there, shuffle everything, whatever; it’s your call.  Just enjoy the tunes!