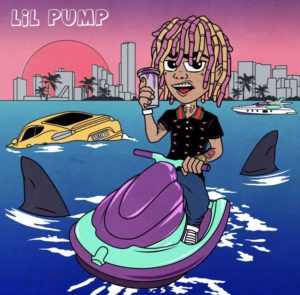 There’s no denying that Soundcloud has become the birthing ground for new hiphop artists. Some of the biggest names today, Chance the Rapper and Lil Uzi Vert to name two, began their record-breaking careers on the platform. Soundcloud’s accessibility has made it easier than ever to enter the game, but just as easy to be buried under a million other users (talented or not). How do you set yourself apart? Lil Pump’s Answer:

With a catchphrase as attention-demanding as his hair, Lil Pump has quickly emerged as one of the rising stars of Miami. The 17 year old currently holds the number three track on Soundcloud with his Billboard Hot 100 track “Gucci Gang” and has track plays up to 39.9 MILLION with “BOSS”. There’s no denying his quick ascent to fame; in fact, his first track was only released this past summer. If one looks closely at his career, the similarities to those of other artists are unquestionable. Lil Pump has latched himself onto certain, popular aspects of modern hiphop, either by choice or by nature, which have made his expedited success less surprising than one might think. Let’s look at a few of his smart moves.

Hiphop has always been about the look. Pink polos and a backpack on Kanye, everything sized 5 times too big on Soulja Boy, and now Gucci belts and Rolexes on Migos. Look at Lil Pump and he’s often decked out or flashing cash, but that’s hard to notice when his hair resembles something along the lines of a special edition flavor of Trix yogurt. Compare it to XXXtentacion or Lil Uzi Vert. Change your hair, change your game.

Pump is an advocate for the use of Xanax and Lean: drugs that have been huge in the hiphop community for years. While they’ve taken the inspiration from Chance (“I got caught up with a lil xan”) and claimed the life of A$AP Yams, mainstream hiphop has not let go of its addiction to these drugs. Lil Pump brags about his usage, “pop 4 xans now I’m feelin like a hero/lean got me like Rio” and regularly posts photos and stories to Instagram legitimizing his claim to that lifestyle.

“Look at Me!” by XXXtentacion launched him into stardom. The distorted bass, repetitive and simple lyrics, short track times, and flow that characterize XXX’s popular style are evident all over Lil Pump’s music. Check out “BOSS” and “MOLLY”. The production is horrendously distorted and Lil Pump (quite literally) yells over the beat. It’s no different from “Look at Me!” Just another Miami artist doing the same thing.

Finally, Lil Pump has built his brand through social media: posting pictures of himself flexing, declaring his love for iCarly, and most notably acting like a total idiot in public. Pump excels in spreading his name through social media. In fact, it’s how I found out about him. Playing into controversy, creating an image that excites some and annoys others immensely, gets you attention from all sides of the spectrum. If you’ve got everyone looking you’re already ahead of the curve.

Lil pump runs Walmart I do what I want

Lil Pump’s debut mixtape, Lil Pump, drops October 6 through Tha Lights Global via Warner Bros. He’s spent the last year building up to this tape and it’s time to see how all his ‘work’ will pay off.