In preparation for me dedicating myself to listening to Earl’s new album for the rest of the foreseeable future, I’ve decided to create a list of what I have been listening to in the past few weeks. All of this stuff is incredible, and should be listened to again and again. Some of it is very, very new and some of it is quite older but all of it was presumably recorded after the year 1994. 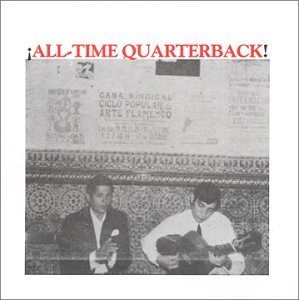 ¡All-Time Quarterback! was the solo side-project for Ben Gibbard, the lead guy for Death Cab for Cutie, and member of The Postal Service. ¡All-Time Quarterback! released two EPs, one on CD and the other as a cassette before releasing this album, which combines the strongest tracks from each release. This mostly lo-fi acoustic side-project occupies a space near the introspective indie rock of Death Cab for Cutie but there is an electronic tint (little bleeps here and there) to some of the tracks that would sit nice with fans of songs like “Holy F****** Sh*t: 40,000” by Have a Nice Life. Gibbard puts together a lot of great tracks delving into nostalgia, suburbia, growing up without dignity, and failed relationships. A lot of these themes are well-trodden indie fodder but it’s hard to find anything wrong with that when it’s done as well as Gibbard does it with this record. Fans of that early Mountain Goats tape hiss/whir will love songs like “Cleveland”, “Sock Hop” and “Underwater”.

I also find this album interesting because I’ve never been interested in Death Cab or Postal Service at all but I see myself playing this every day for the next year? I’m 1 for 3 with Gibbard it seems.

highlights: “Dinner at Eight in the Suburbs”, “Rules Broken”, Magnetic Fields cover “Why I Cry”, and “Send Packing” 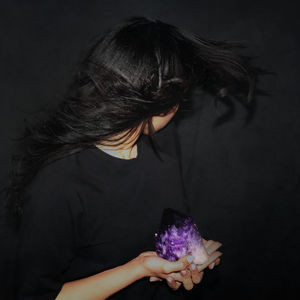 I want to petition that we name Tinashe as Most Likable R&B Star; in addition to her long grind of self-released music and her generous gift to modern pop music (the ironclad “2 On”) she’s decided to grace us now with this free tape of excellent late-night material. Tinashe seems to be the sort of R&B singer who loves to really open up personally and creatively to fans through her art as Amethyst was supposedly recorded in her childhood bedroom over Christmas vacation. Despite that, none of these tracks sound like throwaways or experimental half-thoughts. Her Ryan Hemsworth produced track, “Wrong” is an undeniable slow-burner of a song, the type of classic funk that is seen too rarely in the modern pop landscape. The rest of the tracks get fairly adventurous in terms of beat selection, and this only works to Tinashe’s favor (see the woozy drone of “Something To Feel”) She breathlessly references 2Pac, twerking alone, and “bae” on “Looking 4 It” and apart from being funny, it sounds really really good. All this serves to make Amethyst a very comfortable, playful listen. It’s not weighed down by expectations or any attempts to capture what’s hot on the radio, and as a result it soars above any expectations. 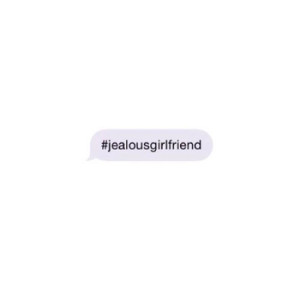 little cloud is a Stockholm-based producer/artist who has collaborated with Ryan Hemsworth and Sad Boys producer Yung Gud on good tracks in the past, but she absolutely blows away with this solo effort. The release is split into two sides, and covers a large expanse of sound during its runtime of just under 30 minutes. The emotional depth being explored here is hard to convey with words, but rest assured, little cloud is on a whole other level exploiting her voice, beautiful washes of noise, and driving beats to fashion a really gorgeous showing of music. Each side dives in and out of ethereal singing backed by dance music bounce and echoed ambient stretches. Some of the moments on this release are painfully tragic and utterly beautiful; rush on over to her bandcamp immediately and pay your respects. 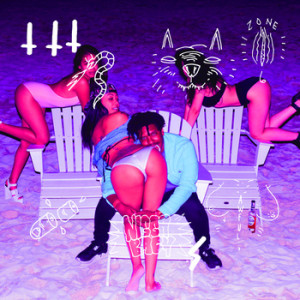 The man who gave us some of the best rap songs of last year (rejoice to this, and this) has given us another offering of off-kilter, stripped-back debauchery filth rap. Apart from being from my native Atlanta (!!!) Father has delivered some of the most solid rap of anywhere last year, pumping out a steady trail of bandcamp releases such as L1L D1DDY in May and Young Hot Ebony in September. Over the course of Who’s Gonna Get F***** First? Father further develops his sparse, minimalist take on rap production and all throughout this album his dead eyed, bored flow is in the center of the haze. Father and his Awful Records collective is really running the “vaguely nihilist, clearly dirty, sinisterly hilarious” lane of rap right now. Isn’t most rap vaguely nihilist? What are Chief Keef’s views on nihilism? Is Father the southern Akinyele if Akinyele only listened to Odd Future? Answers at the bottom of this post!!! But seriously, Father, along with Key!, Makonnen, and Rome Fortune (throw in OG Maco) are making some really great, weird Atlanta rap and I’m very happy about it.

With “BET Uncut” do we finally have our millennial sex-positive answer to “I’m In Love With A Stripper”?

highlights: “Read Her Lips”, Gurl (Abra’s verse is hella), “Everybody in the Club Gettin Shot” + most of the songs on here.

Fifty Grand, or Elliott Onofrio, is a young producer born in Connecticut and based in Hollywood who has been making some of the best behind-the-scenes rap production of recent date. He’s also a member of Team Sesh, a label/collective headed by infamous Los Angeles rapper Bones. With a sprawling collection of Soundcloud sets and some bandcamp releases, Fifty Grand certainly has a lot of material to get lost in. I’ve been trawling through his discography and I haven’t found a track yet that hasn’t floored me. His taste is also incredible, his twitter is a great source for new music as he tweets things like “My peers spoil me w incredible music” followed by encouragements to check his friends’ stuff out. It follows that I found little cloud through his twitter. Fifty Grand songs are alarming, most times, as they can be delicate and pretty at points before falling into savage drums and disarming sounds. His music is definitely informed by the heavy slap of trap music, but he threads in elements of intense emotion and vulnerability that is rarely let through in most trap. Along with being a producer, Onofrio is a trans man, and an outspoken figure for what he calls “the most overlooked group in the realm of LGBTQ”. By his own admission, he has gone through a lot and his music reflects it, with a certain artistic honesty. He tweets regularly in support of greater equality and awareness, and his growing audience and attention is very well deserved — and greatly needed in today’s society.

highlights: this release, his other bandcamp release I Don’t Know Why and his soundcloud sets are all highly recommend. Also this mix for Fader. 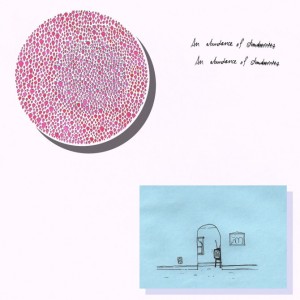 Julia Brown has a penchant for quietly releasing humble masterpieces on the internet, not really caring if anyone hears about them or not. I guess they figure that the people who do feel their music will naturally find it, and that’s allright with them. Whatever the reasons for Julia Brown releasing this album for free on their tumblr and on Dropbox, what’s important is that it is incredibly, mind-bendingly great. An Abundance of Strawberries comes after Julia Brown’s 2013 release, To be close to you, which delivered an equally quiet collection of lo-fi excellence (“library”, “i will do this for the rest of my life”) and in many ways it feels like a natural progression of sound. Gone is much of the lo-fi hiss, and there is a greater depth of sounds used on this album, but lyrically the album is very reminiscent of earlier Julia Brown efforts. Heartbreak, lovesickness, and nostalgic recapturing of sadness are all explored in minute and specific detail here, over crisp drum machines (“Without you (full)”) and some truly sunshine-breaking-through-clouds pop moments (All alone in bed). The frontman, Sam Ray, is known for diligent musical experimentation in his other projects/bands, Ricky Eat Acid and teen suicide (rip), and this experimentation is heard strongly on “You can always hear birds” which sounds like a ambient Ricky Eat Acid track before erupting into rapid Chicago juke drums before slipping into a wonderful guitar track. The man also has a great twitter.