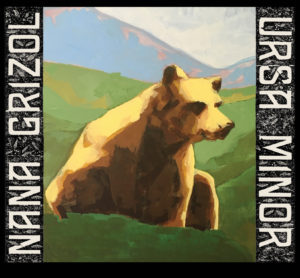 Emerging from a seven-year musical coma, Nana Grizol is back and better than ever with Ursa Minor, another chill indie-folk album offering songs that serve as disillusioned social commentary with compact narratives discussing various personal and societal issues.  As their first two albums have demonstrated, Nana Grizol is all about making the world a place more full of love and appreciation; with a message so wholesome, chords so wistful, and lyrics so earnest, this band is damn near impossible to dislike.

Kicking off the album with a deceptively lighthearted tune, “Nightlines I” is (possibly) supposed to be a reminiscent song about times changing and perspectives growing increasingly negative as time passes (at least that’s what I think it’s about, but I could totally be wrong, I only have ~20% confidence in this analysis).  Regardless of the song’s ~true meaning~, it is irrefutably gorgeous melodically, with a bouncy tune and perfect implementation of horned instruments that balance the somber lyrics in an intricately seductive way.  It’s hard to put words to it, so just go listen.

The same theme about change, but from an alternative viewpoint, comes up in “Bright Clouds,” the following track.  It seems as though the singer has transitioned from being disenchanted about upcoming life changes to becoming accepting and almost grateful for them: “Yeah the ways we envision / The worlds that we want / All the things that I treasure / And I know it’s simplistic / But there’s comfort in change / Some things’ll be different / Some things stay the same.” Ultimately this song is just really sweet and oddly uplifting despite the fact that it’s essentially about coming to terms with loneliness and longing.

Track #5, “Photos from When We Were Young,” is a ballad sharing the story of a childhood friend who had to deal with homophobic parents, how that impacted his or her youth, and how things ended up working out anyway because “You made a family from people you found / You grew into yourself with those weirdos around / Late nights talking at home, or dancing ’til dawn.”  It’s a really sweet song touching on a very serious issue that definitely impacts a lot of people.  Personal hardship is something Nana Grizol isn’t afraid to talk about, and it’s typically done in an inspiring or encouraging way.

The vibe of this album is aggressively beautiful, with some random string instruments thrown in that make it almost tear-worthy in its inherent melancholic/nostalgic vibe.  The two instrumental tracks,“Ursa Minor I” and “Ursa Minor II,” provide an interesting stylistic nuance from the rest of the album by being so explicitly sad, yet also extremely brief.  These pieces neutralize the word-heavy approach taken in most of the other songs on this album.

Overall: a perfect album for sunny days in grassy fields, roller skating with a dog, living lightly, eating cotton candy, sinking into a thicc couch, picking up a piece of trash from the sidewalk, finding shapes in clouds, making plans for a road trip with friends that realistically will never happen, etc.