Today belongs to the love songs.  And with his debut single “Some People,” Nate Banks has made his play to make his way onto your playlist. 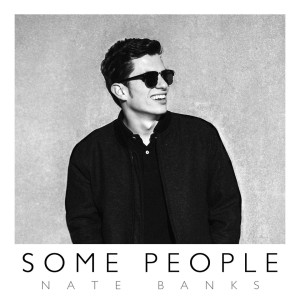 The junior from Fairfax, VA has been involved in the Vanderbilt music scene since a brief stint with the Melodores as a freshman, but this is his first foray into the world of solo artistry.  And “Some People” makes a strong statement about his potential.  The song is driven by a playful, carefree ukulele riff that causes your mind and muscles to relax upon first hearing it.  Banks’ smooth, youthful voice beckons to you over the jaunty beat, entreating you to forget worldly troubles and stay by his side, where you’ll inevitably find the most comfort.  It’s the perfect message for a song being released on Valentine’s Day, particularly if you have a significant other in whose love you can lose your worries until you fall asleep.  And if you are celebrating Singles’ Awareness Day instead, perhaps “Some People” will remind you not to fret, and that as long as you have friends to keep you company, you too can find a way to release the worldly troubles that might be bothering you.  Check out the song on Nate’s website, or just listen via Spotify right here!

I had a chance to talk to Nate about the release of his single and his place within the Vanderbilt music scene.  Read on for the full interview:

ZB: Hey Nate, congratulations on releasing your debut single!  Was there a conscious decision to have its release coincide with Valentine’s Day?

NB: You know, when I was planning out the release and the time I had it ready, submitted it through CD Baby to distribute it to all the different platforms, it just worked out that it would be around Valentine’s Day, and I just figured, “what better day to do it?”  It’s a love song of sorts, it fits well, and it’s a more memorable date than February 13th or February 12th or any of that.

ZB: Well, come to think of it, releasing it a day earlier would’ve meant releasing it on a Friday the 13th, which would’ve been unlucky!

ZB: So you picked an auspicious date to the single and as you said, it’s a love song of sorts.  Where did you find the inspiration for “Some People?”

NB: So really it was a combination of things.  I wasn’t actually in a relationship at that time, but it was just a sentiment that I had felt before.  I picked up my ukulele because I didn’t have my guitar at home, it was back in Nashville [where Nate was last summer], and I just started writing this little riff on the ukulele, making up melodies that became the verse for “Some People,” and then the chorus–you know, I think I actually came up with the whole song that day on the ukulele, without lyrics.  Then I tried to write lyrics that would fit the sentiment of the song musically, and it’s just about this feeling of being in a relationship, where love enables you to transcend the mundane troubles that we tend to worry about.

ZB: It’s a beautiful sentiment, and I think it’s true from the few experiences I’ve had in that area.  Do you know people who correspond to each of the verses in the song?

NB: (Laughing) I mean, honestly, a lot of them are, like, myself–inspired by myself.  But everyone has a tendency to have the idea that money will make you satisfied, that’s a common theme in life, and that’s the second verse of the song.  Adults, they just complain about money, and politics, and stocks…not to trivialize politics–I even say in the song, “Some people dream a world of peace, but that won’t keep you warm at night.”  And there I’m just kidding around, as you can tell by the playful tone of the music.  It’s playful, but it’s also intended to make you think a little bit, and make you realize that worrying won’t get you anywhere.

ZB: “Playful” is a great way to describe the song, and from listening to some of the other songs you have in the works, I’d say it’s a tone that fits your overall body of work thus far.  Do you purposely strive for that sort of vibe when you write?

NB: Not at all…actually, I wouldn’t say not at all.  It’s more like I’m not thinking about writing a playful song, that’s I’m just in that stage of life and that’s the sort of music I gravitated to.  I just naturally wrote happy songs…I guess I was happy.

NB: Yeah, and when the EP comes out in March, I think you’ll find a lot of those songs are happy, too.

ZB: Stylistically, is “Some People” indicative of the songs we’ll find on that record?

NB: Well, I picked “Some People” because it was one of my favorites, as a single, but I also think that it ties together the variety of sounds on the EP.  You’ve got a couple songs more on the jazzy-funky side, and one that’s more on the straightforward pop-rock, singer/songwriter vibe, and I think that “Some People” is a good balance between those two.

ZB: And it’s got such a catchy hook!  You could be singing that chorus forever.  I’m already singing it in my head!

ZB: And hopefully others will be too.  How would you characterize the support you’ve gotten from the Vandy music community so far surrounding your recording career?

NB: It’s been really great, actually.  From people like the guys in the songwriting class, always really encouraging, and of course Deanna [Walker, the songwriting professor], always critical but still encouraging.  But you know, the Vanderbilt music community is an interesting thing, because I feel like it could be a lot more tied together than it is.  There used to be a songwriting club that was the biggest community for contemporary music, other than Blair, which is really about classical music.  But besides that, there’s just classes like songwriting and 21st Century Artistry with Mitchell Korn.  I feel like it could be more of a connected music community, and I’d love to see that develop some more.  But it’s really a lot of support from individuals, and I’ll be supporting them when they come out with stuff as well.

ZB: What you think could be done here on campus to promote the growth of such a community?

NB: You know, it’s hard to say.  Maybe just rebranding the songwriting club…or just having it be a club for anyone who wants to have a career in songwriting or music or that type of thing.  It would obviously take great leadership, but that sort of organization would be great.

ZB: Ah, if only people had time to lead that organization.  I’m going to stop us before we both get too heated on the topic.  Congrats again on the release of “Some People,” and let’s hope it makes waves online and on campus!