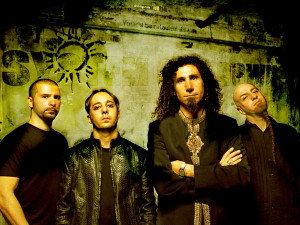 System of a Down managed to capture the zeitgeist of American anti-war sentiment in 2005 with their shocking hit album Mezmerize.

It may be surprising to see a retrospective of a nine-year-old nu metal album on this blog, particularly from a writer who has vented at length about the overall lack of quality of mid-2000s popular music.  Then again, everything about System of a Down’s music, from the band’s ability to mash together disparate and seemingly irreconcilable influences to their shocking success on the mainstream airwaves, is a bit surprising.  System’s landmark 2005 album Mezmerize happened to be on my mind as I put together a discussion for my psychology class, and revisiting it as I worked resulted in three dominant trains of thought, none of which dealt with my homework: 1) nostalgia for the days when my biggest concern was whose backyard trampoline the neighborhood kids would be hitting up after school, 2) amazement at how irresistibly fun the eleven songs are, and 3) wonder at System’s ability to somehow maintain this fun amidst livid, highly caustic lyrics and guitar riffs.  In conjunction, these concurrent streams of consciousness brought me to the crucial question: how the hell did a band like System of a Down hijack the popular music consciousness?

I think the answer boils down to two factors: perfect timing and the group’s ability to infuse its thrashing songs with elements that made them palatable to mainstream listeners.

Mezmerize was released on May 17, 2005, as the first half of a double LP (its counterpart Hypnotize came out in November).  George W. Bush had recently retained the American presidency in the face of strong opposition from John Kerry, but the voices of protest against the war in Iraq had not disappeared with his victory–if anything, they had grown more powerful as casualties continued to mount and no prospect of a clean exit could be conceived.  In many ways, the situation resembled that of Vietnam forty years earlier; had President Bush invoked the military draft, I think the nation would have seen popular revolt near the levels it reached in 1968.  In any such volatile scenario, music naturally takes on the role of coalescing feeling and conveying it in a form that is universally comprehensible and moving.  So it was with Country Joe’s “Fixin-to-Die Rag” and CSNY’s “Ohio,” and so it was with System of a Down’s “B.Y.O.B.”

The second track off Mezmerize and the LP’s lead single , “B.Y.O.B.” encapsulated public outrage at the Iraq War with an effective mix of direct invective and biting sarcasm, mirrored by the song’s transitions from headbanging verses and a brutal bridge to the catchy, tongue-in-cheek, dancehall-esque chorus inviting listeners to the “party” in the desert.  The song’s genius is in this juxtaposition; a straight-up metal song, while easily able to express the rage the band felt at the American government, would not have spoken to a mainstream whose ears are generally turned off to that genre.  In this respect, I find “B.Y.O.B.” similar to Black Sabbath’s legendary protest anthem “War Pigs.”  On top of their common lyrical themes–both chastise politicians for sending in the poor to fight–the two songs feature genuinely ear-pleasing melodies and enough quirks to catch a casual listener’s attention, whether these be Ozzy Osbourne’s unusual vocal timbre or Serj Tankian’s faux-operatic lead-in to the “Bring Your Own Bomb” shindig in Iraq.  The humorous and deadly sarcasm of “B.Y.O.B.” only serves to make the song more accessible, displaying System’s musical range and a level of intelligence stereotypically not common among metal outfit.  Bringing an angry public to bitter laughter and thumping wrath in just over four minutes while packing a pop-metal fusion punch that stuck out among the mainstream rock sound of the time, “B.Y.O.B.” surged into the Top 40 on a wave of anti-war sentiment, the peak of System of a Down’s rather successful recording career.

The rest of Mezmerize follows much the same vein as its hit single.  System of a Down does a masterful job of treating contemporary societal problems with disdainful contempt while stirring in some Zappa-style humor and profanity, delivering firm tongue-lashings against Hollywood vapidness, the media establishment, and the aforementioned Iraq War.  The band rarely gets too serious in these diatribes; highlights of their playful satire include the mock-excited pleas for attention in “Radio/Video,” a fantasy celebrity baseball game in “Old School Hollywood,” and the rapid, bouncy verses of “Violent Pornography.”  That being said, the album has its emotional moments, particularly within the last few songs.  “Question!” cries out in existential angst against the mysteries of death, “Sad Statue” presents a far more straightforward criticism of the war than its side one counterpart, and Mezmerize comes to a close with an ethereal choir of layered Serj Tankians lamenting all those who become “Lost in Hollywood.”

The album’s lyrical brilliance, though, would never have reached a wide audience without System’s ability to pad their nu metal sound with sonic elements considered widely appealing.  It all starts with the dual vocals of Serj Tankian and Daron Malakian; the way they work together resembles the Anthony Kiedis-John Frusciante harmonies that carried the Red Hot Chili Peppers to the top of the rock totem pole in the same era.  In this case, Tankian embodies the zany energy, in everything from his flowing curls of hair to his voice’s manic tone as he ranges from high wails to crisp pseudo-spoken chants, while Malakian provides the more melodic singing and adds power to Tankian as they together deliver some of the album’s most impactful lines.  Beyond the vocal work, it is important to note that Mezmerize, though it certainly fits on the spectrum of metal, has an undeniable pop sheen to it, as might befit an album produced by Rick Rubin.  The wild protest of the lyrics and furious guitar work of Malakian are mediated by melodies that stick to your eardrums and an overarching song structure that feels familiar to the casual listener.  Not to be overlooked are Shavo Odadjian’s thudding bass and John Dolmayan’s varied drumming–over the eleven songs he delivers every style from traditional double bass-dominated metal and pounding punk to jaunty surf rock and mind-bending time proggy time changes, proving that System cannot be locked in the cage of nu metal and consigned to the periphery of radio.  Yet at the same time, framing these other, more accessible genres within the heavy sound at the base of System of a Down enabled the band to tap into the well of fury brewing in the belly of Americans in 2005 in a way that folk singers in the 1960s didn’t have the precedent or the technology to do.  Both messages were powerful, but it’s fair to say that when Bob Dylan picked up an electric guitar in Newport in 1965, he wasn’t selling out the protest music movement–he was opening the door for Mezmerize forty years later.

Overall, listening through the album provides a nice window into the recent past and reminds us that not even a decade ago, the mainstream American music listener was captivated by this powerful and unorthodox message against the Iraq War and other excesses of the mid-2000s.  Given the relative lack of diversity in today’s pop music (a major reason I work at, and you listen to, WRVU), it’s fair to wonder what enabled System to break through with Mezmerize, and whether current dissatisfaction with partisan politics, racial tensions, and a growing income gap will create an opportunity for another crossover success.