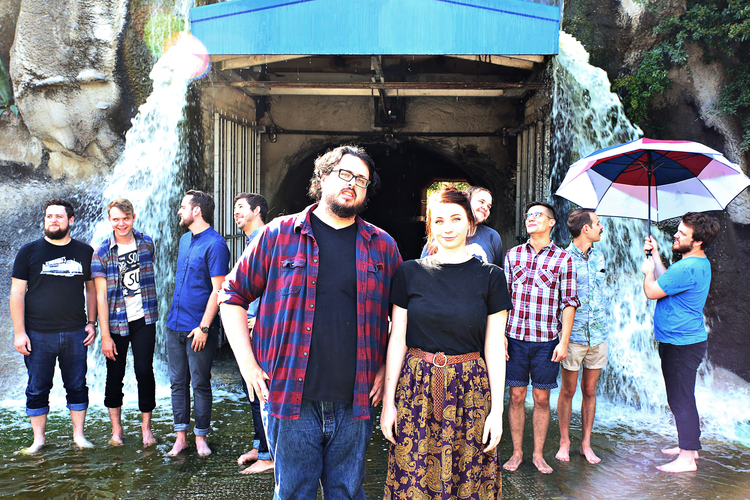 Allow me to introduce you to The Oh Hellos. Siblings Tyler and Maggie Heath (center) formed a folk rock duo in 2011 and have since released three albums. Today, as you can see, they are supported by an army of musicians. The Oh Hellos are an independent band, meaning they are self-funded and do not belong to a record label.

Before you say “oh no, not another indie folk band,” hold your judgment and watch their NPR Tiny Desk Concert from December.

The Tiny Desk Concert began with “Hello My Old Heart” – which is and forever will be my favorite song by them. However, their latest album Dear Wormwood is certainly worth a listen. Released in October 2015, Dear Wormwood was recorded, piece-by-piece, in the Heath’s home in San Marcos, Texas. I find that the impressive commitment to doing it their own way sets them apart from other folk bands. Maggie’s hallowing voice, especially on “Pale White Horse,” adds a certain poignancy to their music. The Oh Hellos wrote these new songs with genuine emotion, which is evident in their live performances. Recent works by authors C.S. Lewis and Patrick Rothfuss served as inspiration for Dear Wormwood. Perhaps because of these influences, this record has the air of an epic poem marked by adventure, struggle, and loss.

Admittedly, their lyrics alone may seem like a cliche. But, they are executed with such sincerity and depth that you can’t help but hang on to every word. The Oh Hellos website aptly describes Dear Wormwood: “[it] presents two alternating faces: at times delicate, intimate, affectionate; and at others, soaring and towering and joyfully explosive.” I, myself, am a proponent of viewing albums as one work, rather than separate songs. Dear Wormwood has the deliberate flow of an album that is meant to be listened to all at once. So go ahead, take 39 minutes out of your day and listen to it. Then listen to it again. And again. I assure you, by that third listen, the music will seep into your soul.

However, if you are so painfully busy that you want to skip to the good stuff, here are my favorite tracks in no particular order:

From what I’ve seen, The Oh Hellos would shine in a live performance. Well you’re in luck, they will be participating in several music festivals this year, including Okeechobee (March 4-6), Bonnaroo (June 9-12) and Pickathon (August 5-7). Maybe I’ll see you there.

But first, listen to Dear Wormwood below: