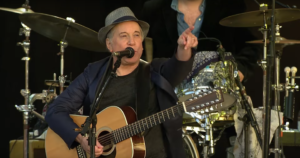 The number of artists who started writing music in the 1950s and are still selling out arenas in 2018 is very small. While each of the giants in this musical pantheon is immensely influential, one in particular stands out in my mind as the greatest for his influence on both music and culture.

Paul Simon has just retired, both from touring and from writing music.  According to Simon in an interview with NPR, “I literally felt like a switch clicked and I said ‘I’m finished’.” As a fan, this moment is bittersweet.  While it’s sad to lose this immense musical mind who’s been churning out classics since my parents were six years old, I’m glad that he’s going out on top.  I had the opportunity to see him live in Atlanta in September, and his voice, for the most part, sounded practically the same as it did on The Rhythm of the Saints from 1990.  The arrangements were fresh and exciting, demonstrating his commitment to pushing music forward for as long as he’s in the business.

I think I’d be doing our blog a disservice if I didn’t give at least a brief overview of the immense musical legacy Mr. Simon is leaving us with. His earliest work with Art Garfunkel is still among his most celebrated for its value musically (their harmonies still give me chills after hundreds of listens) and culturally, as many of their songs played a prominent role in the social revolution of the 1960s.  Simon & Garfunkel released their debut album, WEDNESDAY MORNING, 3AM in 1964 and found little success, as the British Invasion was still dominating American airwaves.  However, the song “The Sound of Silence,” initially a purely acoustic track which Paul wrote when he was 21 years old, was re-released as a single with electric guitar and bass overdubs, gaining the duo immense cultural traction.  Their sophomore album, Sounds of Silence continued mainly within the folk tradition but revealed some more variety, like the driving Rhodes opening of “We’ve Got a Groovy Thing Goin’,” and harder rock edge to “Richard Cory” and “Blessed”. 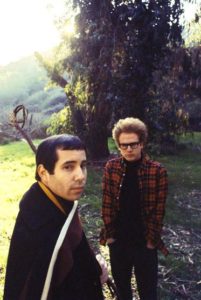 The rest of their career as a duo saw them augment their newly found clout with legendary studio musicians including Carol Kaye and Joe Morello, as well as incorporating a growing number of stylistic influences, including zydeco, delta blues, renaissance music, and more.

Side one of Bookends is one of the most engaging and impactful concept albums of all time.  The listener is smacked in the face with a thicc, grimy Moog synthesizer 33 seconds into the record, and it becomes immediately clear that Simon has once again expanded his mastery of different genres.

The strained recording sessions of Bridge Over Troubled Water would lead to the breakup of the duo, but would produce some amazing songs and lay the groundwork for much of the development of Paul’s solo career.  The rock n’ roll influence on “Baby Driver” and the Peruvian backbone of “El Cóndor Pasa” would open the floodgates to his “world music” approach in his later albums. 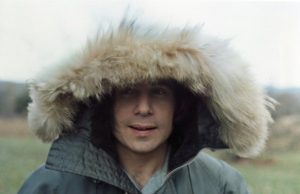 It’s pretty incredible to be able to witness the way a musician evolves over the course of a 54-year-long career.  Albums like Graceland and The Rhythm of the Saints, perhaps my two favorites of his career, rely heavily on collaboration with musicians from sub-Saharan Africa and Latin America, respectively, yet still make sense within the context of his discography and surprisingly do not come across as gimmicky or affected.  This is because Simon was so active throughout his career in integrating sounds from around the world and collaborating with (and crediting) musicians from those places.  In this context, the township and Latin grooves do seem to work as an extension both of Paul’s trajectory and of the trajectory of popular music as a whole.

Paul Simon was never complacent in his sound.  He was constantly evolving, from folk singer-songwriter to poet of urban melancholy, to rockstar, to prophet of humanitarianism.  As his consistent decades-long contributions to American popular music really cannot be overstated, Simon certainly deserves a nice retirement.