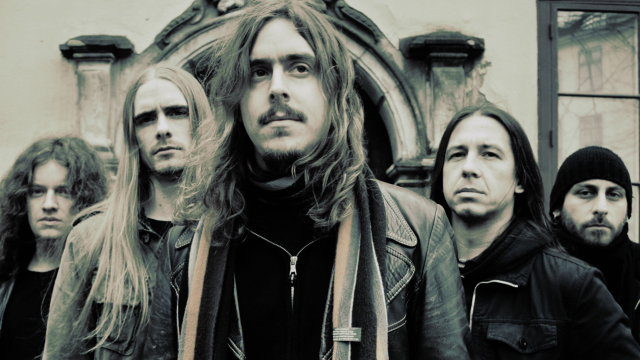 Anyone familiar with the name Opeth most likely knows the Swedish band for being innovators in the progressive metal genre.  Their extremely unique sound has led them to worldwide acclaim in the metal community, and the band has had much praise from the modern progressive rock community as well.  Albums such as Blackwater Park and Still Life have become some of the most heavily-praised metal albums of the modern era.  Many fans, myself included, love Opeth for their ability to change from an extremely heavy metal riff to a beautiful acoustic guitar with the creativity and skill that few bands can even manage to pull off a few times, let alone as consistently as the band has proved.

With their 2011 album Heritage, many of those same fans would had seen the band start from a basic death metal band and morph into the prog-metal giant that they are today began to drift and lose interest in the band as Heritage had no death metal vocals and severely lacked in heavy riffs.  Some fans even became upset at the new “jazz-rock” album that Opeth tried to pass off as progressive, and they demanded that Opeth go back to their death metal roots.  I really enjoyed Heritage because I thought that the album was very unique, especially considering the band’s other material, and had many absolutely wonderful, beautiful moments.  It was an extremely gutsy release for Opeth, and I think that it certainly paid off as it brought a whole new set of fans to familiarize themselves with their music.  Mikael Akerfeldt has stated that he views both Heritage and Pale Communion as rebellions against the metal genre.  I certainly think that Heritage stands up to the band’s strongest heavy releases.  Now, I’ll be doing a track by track review of the next step in Opeth’s “rebellion against metal”, Pale Communion.

The album starts off with a heavy organ riff before settling into a groove with the 70’s-sounding organ and jazzy drumming.  When I first heard this song, I thought that the beginning was very reminiscent of Deep Purple.  Of course, it could be that the opening track is heavily focused on a gritty organ-oriented sound, which immediately reminds any Deep Purple fan of the late Jon Lord.  Dramatic organ chords wail throughout the entire track, and the vocal melodies are rather nice.  There’s a great guitar solo in the middle (something to be expected most of the time from a band like Opeth) which seems to have a been heavily influenced by Eastern music.  Also conjuring up images of Eastern music is one of my favorite parts of the entire song, a faster riff played by both guitar and organ in sync near the end of the track.  Overall, “Eternal Rains Will Come” is a strong opener to the album (and one of my favorite tracks on the album).

“Cusp of Eternity” was the first single released in promotion for the album.  The first time I sat down and listened to it, I was not impressed, and the song lowered my hopes for the album.  The entire song is held down by a rather simple muted guitar part in the background, and I don’t find it to be a particularly interesting part.  I do, however, really enjoy the vocal harmonies present throughout the song, and the guitar solo is, once again, a track highlight.  The first single off of the album simply doesn’t have any particular aspect that keeps me coming back and wanting to listen to it again.

Track 3 is the longest on the album, and it contains some of the best material on the entire album.  The clean, jazzy guitar and piano parts really heighten the effect of the vocal parts.  Despite the clean acoustic parts and beautiful guitar passages, “Moon Above, Sun Below” also happens to contain some of the best heavy material on the album.  Considering the diversity of the track, it easily reminds me the most of Opeth’s largest strength: creating songs that flawlessly flow to and from genres while still making them feel cohesive.  There is one section around 6:40 which doesn’t exactly leave a good impression, but track 3 is one of my favorite songs from the album. 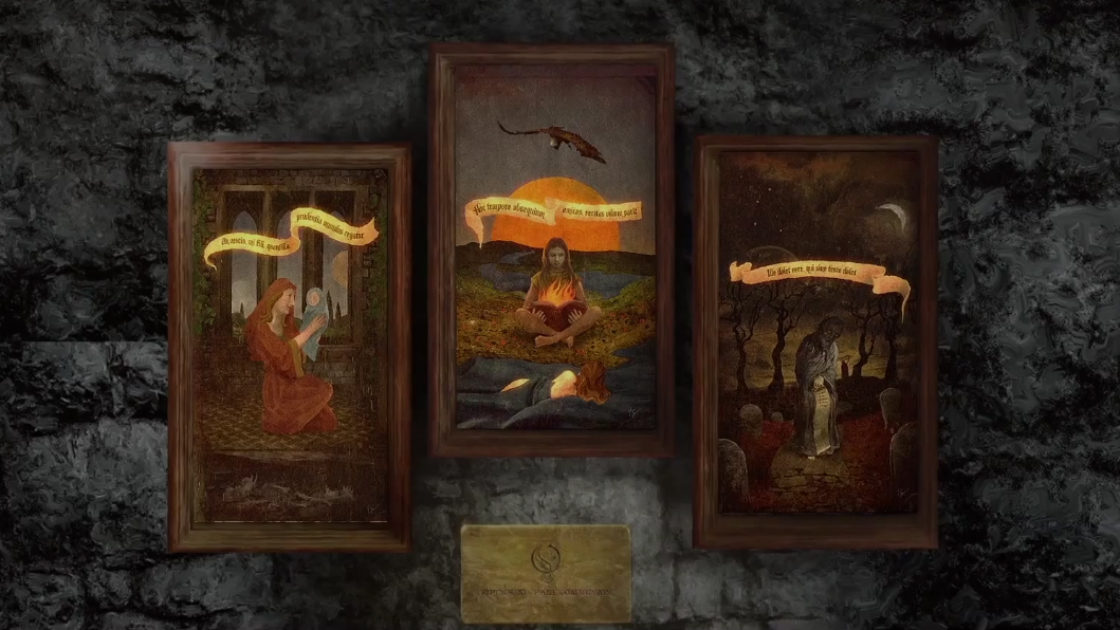 The song with the most acoustic guitar, “Elysian Woes” is beautiful.  The vocals and acoustic guitar mixed with flute and harpsichord make for a beautiful, yet haunting song.  After listening to the lyrics several times, you realize the sadness behind the lyrics.  Combining the wonderful music and meaningful lyrics creates a dark atmosphere for the song, yet keeps the listener attached.  This song is definitely one of the more interesting ones on the album and somewhat of a black sheep of the pack.

I read somewhere this summer that “Goblin” was Mikael Akerfeldt’s tribute to the 70’s prog-rock outfit Goblin.  This song is definitely the most straight-forward one of the bunch.  It is basically a little over 4 minutes of heavy guitar and organ riffs.  Unfortunately, I don’t find much of the song too interesting.  The riffs don’t sound original, and the song leaves me completely unmoved and screaming for something with dynamics and character.  It sounds like a missing Deep Purple instrumental from the 70’s.  If I wanted to listen to that, I would put on a Deep Purple record.

The best part about “River” is either the vocal harmonies or the guitar solo at about 2 minutes in.  I think that many of the song’s chords sound like they come from a band like Wishbone Ash or something of the like.  There are cliche dueling guitar solos around the middle of the song which transitions into a section that sounds like Wishbone Ash to such an extent that it was uncomfortable.  After that comes an Eastern-influenced instrumental section which is somewhat interesting.  That section segues into a dramatic ending with a fantastic vocal harmony.  This song falls in the middle as far as song quality on the album goes.

“Voice of Treason” sounds very similar to “Kashmir”.  I don’t know any other way of explaining the song in a better way.  There are synthesized strings playing in chromatic intervals, which sounds strikingly similar like the main riff from “Kashmir”.  Also, there are more strings added on top, which doesn’t exactly help to get rid of the “Kashmir” feel.  I find the song to be unoriginal and bland.  It tries far too hard to draw out the Eastern influences, going as far as to use a large amount of sitar throughout the track.  This track is definitely one of the weaker ones on the album. 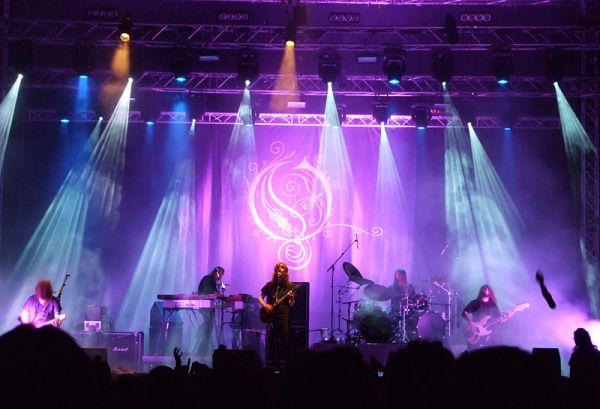 I absolutely adore the opening to this track.  The strings are grandiose and perfectly start off the end to the album.  This song best encapsulates the style and direction of the album and is obviously the best choice for the closer.  The chord changes from the string section mixed with the emotional vocals and astounding production make for a wonderful song.  This is most likely my favorite song on the album.  Ending with soft piano, strings, and vocals rather than an abrasive heavy metal riff was a smart move for the album as it makes more sense given the album’s material.  This track belongs at the end of the album, and Mikael Akerfeldt knows it.

Opeth’s new album presents many ups and downs.  I enjoy most of the music on the album since I am a progressive rock devotee and almost all of the music on the album is straight up prog-rock.  However, the 70’s-prog-rock atmosphere is actually the aspect of the album that I don’t enjoy.  My reasoning is this:  I have enjoyed Opeth’s music for several years now based on their uniqueness and ability to create music like no other band can do.  If I wanted to hear a 70’s prog-rock album, I would pull out a Yes or a King Crimson record.  This isn’t to say that Pale Communion is filled with bad music.  In fact, most of the songs I enjoy quite a lot.  However, in my opinion, it is not the true Opeth style to make an album that blatantly sounds like another band’s record.

Pale Communion will almost certainly garner a lot of attention and become a successful record.  However, I don’t believe that it will be remembered as a masterpiece like many of their other albums.  At the end of the day, ever though Pale Communion will be in my album collection, I will end up passing it over for something like Blackwater Park or Morningrise if I want to hear an Opeth record.