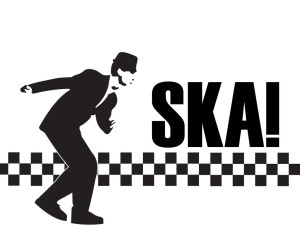 When you think “punk” it is likely that images of garage bands, spiked hair, and lyrics about anarchy and disestablishment come to mind. However, when you think “reggae” you may conjure up images of the beach, slow beats, and lyrics about peace and love. After taking a closer look, the two seemingly opposite genres are in fact not all that dissimilar. While the two originated in different times and in different ways, they have since been brought together to make some groundbreaking tunes that we now usually refer to as “ska.”

Reggae started in Jamaica in the 1960s, once solely referring to Jamaican dance music. The genre incorporates rhythm and blues, jazz, calypso, and African/Latino music. It is characterized by its use of guitar, bass, piano, offbeats, and light or personal lyrics. Punk originated around the same time period, (late 1960s), primarily in the UK and USA. Its origin had a fundamental basis on rejecting the mainstream, with very terse and aggressive lyrics to match. Musically, it used the same time signature as reggae (4/4), but with heavy guitar distortion and distinct drumming.

The combining of the two comes in a genre we now call “ska.” However, the term ska was actually used before reggae hit popularity and it was a combination of calypso and American jazz, most notably sounding more upbeat than reggae. The first wave of ska was in Jamaica in the 1960s, also around the time reggae was gaining popularity. Artists included The Skatalites, Byron Lee & the Dragonaires, and Bob Marley’s The Wailers.

The second wave of ska was when punk entered the equation. It was also called the formation of the 2 tone genre. It started in the United Kingdom in the 1970s with bands such as The Specials and The Clash. The name 2 Tone was also a movement that supported racial equality and therefore lyrics were centered on this theme. This is my personal favorite wave of ska because it has an incredibly unique sound. It is mostly a combination of reggae instruments with faster beats and slightly harsher punk-like vocals, but there are obvious variations as well, which can be noted below.

The third wave of ska occurred in the late 80s and continued into the 1990s. At this time, ska had reached other countries such as Australia, Spain, and France. Furthermore, ska reached its peak in the United States with bands such as Operation Ivy, Alkaline Trio, and Reel Big Fish. Most songs of third wave ska are fast-paced, use brass instruments, and have a more garage-rock sound and style.

Since the introduction of third wave ska, there have been several sub-genres (especially ska punk) that have continued into the 21st century with bands like Streetlight Manifesto and Catch 22. Modern ska has even taken back to its roots and can be seen covering more mainstream songs. The genre has not been as lively as it once was in the 70s and its revival in the 90s, but nevertheless it is alive and well.