Here at WRVU, we’re all about the underground music scene, whether we’re introducing you to fresh new songs or interviewing artists who may not even be college graduates yet (in fact, my show is entirely the latter). Recently, though, I discovered an app that is destined turn the entire Vanderbilt campus into amateur rappers. It’s called Rapchat, and it’s the long-awaited messiah of the Vanderbilt rap scene. 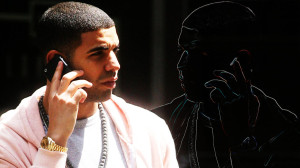 Drake consults with his ego before sending a diss Rapchat to Kendrick Lamar, Diddy, and Big Sean.

The app is simple and very easy to use. All you have to do is pick one of the pre-packaged beats (there are a few dozen from which to choose), hold the phone to your ear, press record, and spit some dope lines into the mic. Then you send your killer freestyle to your friends, who are connected to you via Facebook. The beats are actually not a total joke–it seems the developers crowdsourced them from Soundcloud beatmakers, and indeed you can check out the Soundcloud page of each of the beats’ creators. It’s a brilliant symbiotic relationship that provides Rapchat with its production and the beatmakers with an audience for their material.

Deep down inside, everyone wants to be a rapper, and I’m no exception. I started from the bottom of Rapchat over winter break and the rhymes have been flowing ever since. I make them everywhere; honestly, it’s hardly more obnoxious to rap into your phone than it is to take a shameless Snapchat in public, and will become less so as Rapchat inevitably takes over, following in the mythical footsteps of Yik Yak, Tinder, and Instagram. Of course, however, the most creative juices come out in the bathroom, where Rapchat becomes Crapchat.

Much of my fraternity now uses the app, and I’m proud to say that our brotherhood has never been tighter. The ability to instantly compose a diss track and send it to the entire chapter means that no one can really rise above the rest. We will come up as a crew or not at all, and if anyone breaks the code, they will certainly be cut down to size by some of our more caustic tongues: C-Flow, Blumin’ Onion, etc. Today you might not know these names, but tomorrow they will be the next A$AP collective, busting out thirty second nuggets of lyrical gold and shooting up the universal musical consciousness of the country.

The real beauty of Rapchat, though, is that none of your rapt listeners can tell if you’ve freestyled your lines or if they were meticulously prepared. I find that leaving this particular mystery unsolved builds up my intimidating aura more effectively; it leaves my audience with the force of my words ringing in their ears, bouncing around their brains, bamboozled by my dope rhymes with no choice but to assume that I invented them on the spot. Of course, I am sure to maintain a healthy distance between myself and any haters for the time being; I don’t yet feel as though I could take down Supa Hot Fire in verbal combat, and he is naturally the standard to which any good rapper must hold him or herself.

Anyways, the moral of the story is that I’ve been fighting to expand the Vanderbilt music scene since the fall of 2012, and now the tool by which this will happen finally exists. I want everyone reading this to download Rapchat and tell their friends to do the same. With any luck, Vanderbilt will soon be not only the happiest campus in the country, but also the dopest.