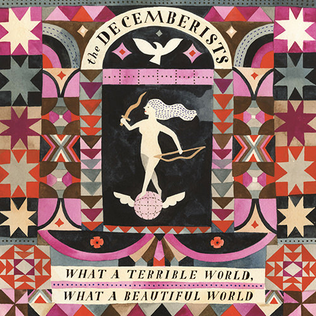 Driving back to Nashville from Lafayette, Indiana this weekend, I decided to revisit the Decemberists’ entire discography on the way down, to listen to each record and then to rank them in a hierarchy. The result was a list ordered as such:

You may notice that their most recent release, What a Terrible World, is at the bottom. What you can’t see is how strikingly large the gap between albums six and seven actually is. Make no mistake — WATW is still a decent album by any standard. But it does stand as the Decemberists’ biggest disappointment, especially given the bands remarkable consistency and excellence. I want to reexamine What a Terrible World a year after its release, unpack its problems, and see if they can be fixed.

Firstly, I’m not the only one who was disappointed in WATW: everyone’s dearly-beloved, Pitchfork, gave it a 5.6 — the lowest score the Decemberists have received, slightly beating out The Hazards of Love‘s 5.7. And while The Hazards of Love‘s Metacritic score is slightly lower that WATW (77 vs. 74), this is mostly due to the extreme reactions provoked by a 60-minute concept album about forest-dwelling shapeshifters. There are those who loved Hazards (sputnikmusic’s 4.5/5) and those who hated it (Slant’s 2/5). Reaction to WATW was considerably more muted — no one loved it, but no one hated it. This comes down to What a Terrible World‘s first fatal flaw: it’s boring.

Say what you will about Hazards, but at least it was ambitious. Too ambitious, perhaps. Yet, it’s an album that finds the Decemberists exploring new ground musically, lyrically, and thematically. For some, this ambition was rewarding; for others, the album suffocated under its own weight. But no one ever accused it of being boring, and that’s the first problem with What a Terrible World. It’s an oversize album at 53 minutes and 14 songs, but does nothing with that time to evolve the Decemberists’ sound. There’s no drive to explore, no ambition. And while there are some truly brilliant songs, there’s also an unusual number of duds. Of course, there’s little that the Decemberists could do about that fact, necessarily — they recorded the songs that they had, and that’s what they had to work with.

This is why the greatest problem with WATW is the sheer laziness with which it was edited and ordered. Firstly, there are too many styles of song on the record. The Decemberists have toyed with different genres and tones before, of course, but always in a way that was consistent across each album. Castaways & Cutouts, The Crane Wife, and The Hazards of Love are much more serious and stately than the ramshackle and fun Her Majesty the Decemberists and Picaresque. They’ve done prog (The Crane Wife, Hazards of Love), indie folk (Castaways, Picaresque), Americana (The King is Dead), and pop (Her Majesty).

On What a Terrible World, all of these — humor, seriousness, Victorianism, folk, pop, rock, prog — come crashing together. The result is that you feel like What a Terrible World isn’t one album, but rather 1/3 of 3 different albums. There’s a fun, poppy album (“Philomena,” “Cavalry Captain,” “Anti-Summersong”), an Appalachian folk album (“Carolina Low,” “Better Not Wake the Baby,” “Til the Water’s All Long Gone”), and a middle-of-the-road indie folk album (“A Beginning Song,” “Make You Better,” “Lake Song”). And while each of these songs works on its own terms, they simply don’t work together. The result is an album that feels disjointed, a particularly unusual criticism given the unity of the rest of the Decemberists’ discography.

This is again compounded by the songs’ poor sequencing. The Decemberists did nail the first two tracks, though: the combo of “The Singer Addresses His Audience” and “Cavalry Captain” just works, and the effect feels wonderfully reminiscent of the the beginning of the stellar Picaresque. Unfortunately, the album unravels from here.

The jump from the humorous ode to cunnilingus “Philomena” to the incredibly sincere anthem “Make You Better” is particularly egregious. This is the worst of the bunch, but there are other points where you simply have to wonder what the Decemberists were thinking. Why strand one of their all-time best pop songs (“The Wrong Year”) on an island between two slow folk dirges (“Til the Water’s All Long Gone” and “Carolina Low”)? Why place mid-tempo rocker “Mistral” right before the acoustic and aching “12/17/12”? Why place three 5+ minute songs together, then place three songs under 2:30 back-to-back-to-back later in the album? Why bother placing the turgid “Easy Come, Easy Go” on the album at all?

These problems can’t overtake the fact that, even at its worst, WATW still has some damn good songs. “The Wrong Year” is easily the best ‘song’ they’ve written since 2005’s “The Engine Driver.” The Nick-Drake-esque “Lake Song” is packed full of beautiful instrumentation and wonderfully evocative lyrics. “The Singer Addresses His Audience” and “A Beginning Song” are wonderful bookends to the album. The fact that the raw material — the songs — have real merit is part of what makes the album’s failure all the more disappointing.

Fortunately, thanks to the power of the digital age, this album can be salvaged. It can be re-cut and edited on Spotify and iTunes playlists. To end, here are a few possible ways the Decemberists could have done the album, all of which would be an improvement.

The truth is that, lurking underneath its disjointed structure, odd pacing, stylistic cacophony, and overlong length, What a Terrible World, What a Beautiful World was good album. It’s just a shame you had to dig so deep to find it.