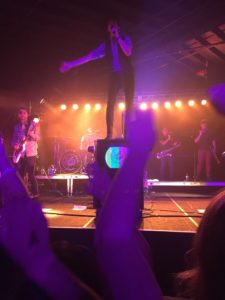 Last Tuesday night, droves of Saint Motel fans packed into the dim, cozy space of Cannery Ballroom, anticipating the eclectic show that was to come. Among those fans were fellow Vanderbilt students, high schoolers, and even a few parent-aged folks. Despite Saint Motel’s indie-pop label, this diverse crowd is a testament to the wide-ranging appeal of their high-energy sound and quirky stage performance.

Following a stellar performance from Hippo Campus (and a typical interminable wait), the stage went black and the “saintmotelevision,” a gesture at their freshly released album, flickered on. The classic Saint Motel logo materialized on the screen, as a muffled voice came on over the speakers describing a mission of music. The whole display was reminiscent of a simulation ride at Disney World (so, yeah, it was awesome).

Lead singer A.J. Jackson ran out with the rest of the band and started off the show with a few older songs, like “Cold Cold Man” and “Feed Me Now.” The crowd seemed to vibe with these classics, screaming all the words and jumping in time. At a few points throughout the show, A.J. hopped on top of the television prop and showed off some of his vaguely cheesy, but mostly adorably quirky dance moves. During “You Can Be You,” a catchy tune from their new album, he incited an iconic arm wave throughout the crowd from atop his television throne, even though the song really didn’t call for it at all.

Although the music was catchy and urgently danceable, I feel required to note the genuineness of A.J. that came through in his performance. More so than any other artist I have seen live, he appeared to do what he felt the music inspired him to. At one point in the night, this drive landed A.J. on the floor for a solid five minutes dancing away. Many times, he would sink beneath the podium formed the television prop, then pop right back up again when the tempo picked back up.

I think the best part of the concert was the encore, which was impelled by a roaring crowd. A.J. and the band returned from the other side of the room with “Just My Type.” By the chorus of the song, the entire room was jumping to the beat, rotating as the band made their way back to the stage to finish up the set. The last song of the night “Born Again,” a popular hit from their new album saintmotelevision, was the perfect closing to an incredible performance. A.J.’s ending position, standing on the podium with his back to the audience and his arms raised like a majestic eagle, finalized the transcendent nature of the concert.

In all, Saint Motel delivered a light-hearted, vivacious, and effortlessly genuine performance. Although the high-tempo, catchy beats characteristic of the band undoubtedly lent to the infectious vitality of concert, I was drawn to the realness of A.J. himself as well. If you missed Saint Motel last week, check out their new album saintmotelevision to get a taste of the high-energy goodness.