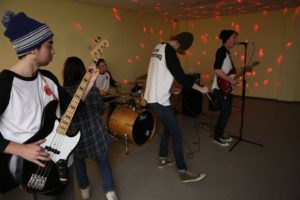 For those of you who missed it, Stop Resisting recently had a show in the basement of Towers. The set-up was great, with curtains over the door and multicolored lights playing off the walls. However, for some of us concert goers it was a little difficult to tell what exactly was going on with this new band. They played a mix of originals and covers, and while I was incredibly entertained, I needed to find out a little more about this new band. I emailed one of the band members, Will Braithwaite, and he got me the inside scoop. So without further ado, I give you Stop Resisting.

How was Stop Resisting founded?

Sam Jenson: On a rainy walk home from Buttrick, I had to write a song using symbolism for my songwriting class at Vanderbilt. So Will and I jokingly put together a song using rain to symbolize sadness and tears. We ran home, pulled out the guitar, and threw together what would eventually become It’s Raining At Your House 2. The rest is history.

How did all of the members come together?

Will: Chris used to be best friends with Sam in elementary school but they stopped talking. They were still roommates in college though. They hadn’t spoken in years when Chris heard the song. Finally he spoke: Keep it down. Then he said “wait, keep it up.” We started practicing. A boy named Evan kept scampering up to the door trying to listen to us. We eventually caught him and his bass guitar in a small fishing net. The rest is history.

How did you guys choose your name?

Will: We started brain-storming names one day over lunch, wanting to capture some teenage edginess.  we went through a few early names, Peach Fuzz, Fall Out Boys, Dark Men, Vanderbanderbilt, A Picture of My Dog, I Don’t Go To Church Anymore Because Music Because Jesus Was A Sinner, About Our Art, but none of them seemed right.

How does the writing process work?

Sam: Will and I have a writing partnership, like Lennon and McCartney, Simon and Garfunkel, or Siegfried and Roy. One of us will come up with a melody or simple phrase that becomes the crux of the song. Then we bust the guitars out, slip into our thinking beanies, and start writing. I won’t let Will leave the room until the song is perfect.

I noticed that you had some parodies, some covers, and some originals. How did you make decisions about the setlist, who wrote the originals, etc.?

Will: I’m glad you asked that actually, what we—

Sam: Shut up. Basically, we’re trying to prove that songs can be ironic and unironic at the same time. It’s Raining at Your House 2 has lines like “Yeah it sucks and yeah I’m sad” which are funny, but I feel that emotional punch every time I sing it.

Will: Sam and I wrote all 3 of our original songs and we chose as a band to cover Coldplay, Fall Out Boy, and Drake and Josh: The three pillars of pop punk.

When did you guys decide to hold your show in Towers?

Sam: Around 1:30 pm, can’t remember the day though. We needed a space that felt vaguely rule-breaking, that was at the same time: cool. My girlfriend gave me the final push to make our dreams a reality.

Was it meant to be a serious show or a more casual thing?

Will: We found it’s much easier to mosh in casual clothes, but with a serious attitude.

What impressions did you guys get from the show? Did you feel as though it was a success?

Do you have any plans to play additional shows in the future? What does the future hold for Stop Resisting?

If you want to check them out, click on the link below!