What happens when an LA-based Surf Punk band comes to play a sold-out show in East Nashville? Chaos, but in the best possible way. On October 7th, 2019 Surf Curse, a band consisting of Drummer/vocalist Nick Rattigan and Guitarist/Vocalist Jacob Rubeck, played at DRKMTTR collective in East Nashville. Accompanied by Nashville bands Promweather and Peachy, as well as the New York-based Dirt Buyer, the lineup was stacked, and the energy in the room was electric all night. When Nick and Jacob finally hit the stage, they started out running, playing “Heathers” from their debut album Buds. The audience ignited into a mosh pit that did not die out throughout the duration of the evening.

Very rarely does a drummer succeed in singing as well as Nick Rattigan does. As he pounded away at his drum set, his voice tore through the air as he sang songs from their new album Heaven Surrounds You. The audience was reacting just as fervently to these new songs such as “Maps to the Stars” and “Labyrinth” as they did with their older songs such as “Ponyboy and “All is Lost”. Rattigan, who’s other project Current Joys is just as popular as Surf Curse, shows two very different ways of performing with these two projects. Current Joys is more stripped-down, with Nick playing guitar instead of drums, and Surf Curse is incredibly high energy, making the listener just want to dance. The one thing that is the driving factor in both is Rattigan’s voice, which can captivate a room with a single sound, which Rattigan displayed Monday night at the beginning of the song “All is Lost” where he opens by screaming out “STAY!” Nick and Jacob switched off on vocals throughout the evening, each injecting their own personalities into the performance while still maintaining the Surf Curse sound. The two musicians fed off of each other as they played, and it is clear to see how they are able to collaborate to create great music.

The show consisted of little commentary from the duo, but the words they did speak were worth being said. At one point Rattigan stopped and asked if the audience wanted to hear a joke, to which he responded with “the Healthcare System in America.” Rubeck spent a period of time requesting that someone should grab him a “Colorado Kool-Aid” as a worker handed him a Coors Light. He then made the claim that Coors Light is superior to water itself. 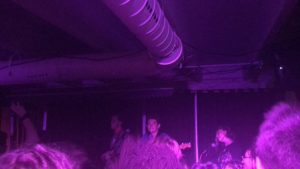 The peak of the night came at the end of their set when the duo broke into the lead single off of their new album, “Disco”. The opening bars of Disco had the meekest concert-goers jumping into the middle of the mosh pit, and towards the end, even Rattigan hopped off of the drums to join in. By the time the song ended, the smell of sweat filled the air, and many voices had been lost. But as Surf Curse walked off the stage, the word “Freaks”, a song off of their debut album, filled the mouths of the concertgoers. Rattigan and Rubeck came back on stage and played “Freaks”, which was just as receptive by the audience as “Disco” was.

Surf Curse’s show at DRKMTTR showed just how fun rock music can be as the performers and the audience poured their hearts out during the entire performance. If Surf Curse comes to a city near you anytime soon, it would be a shame not to see them play.

Check out their new album Heaven Surrounds You here: