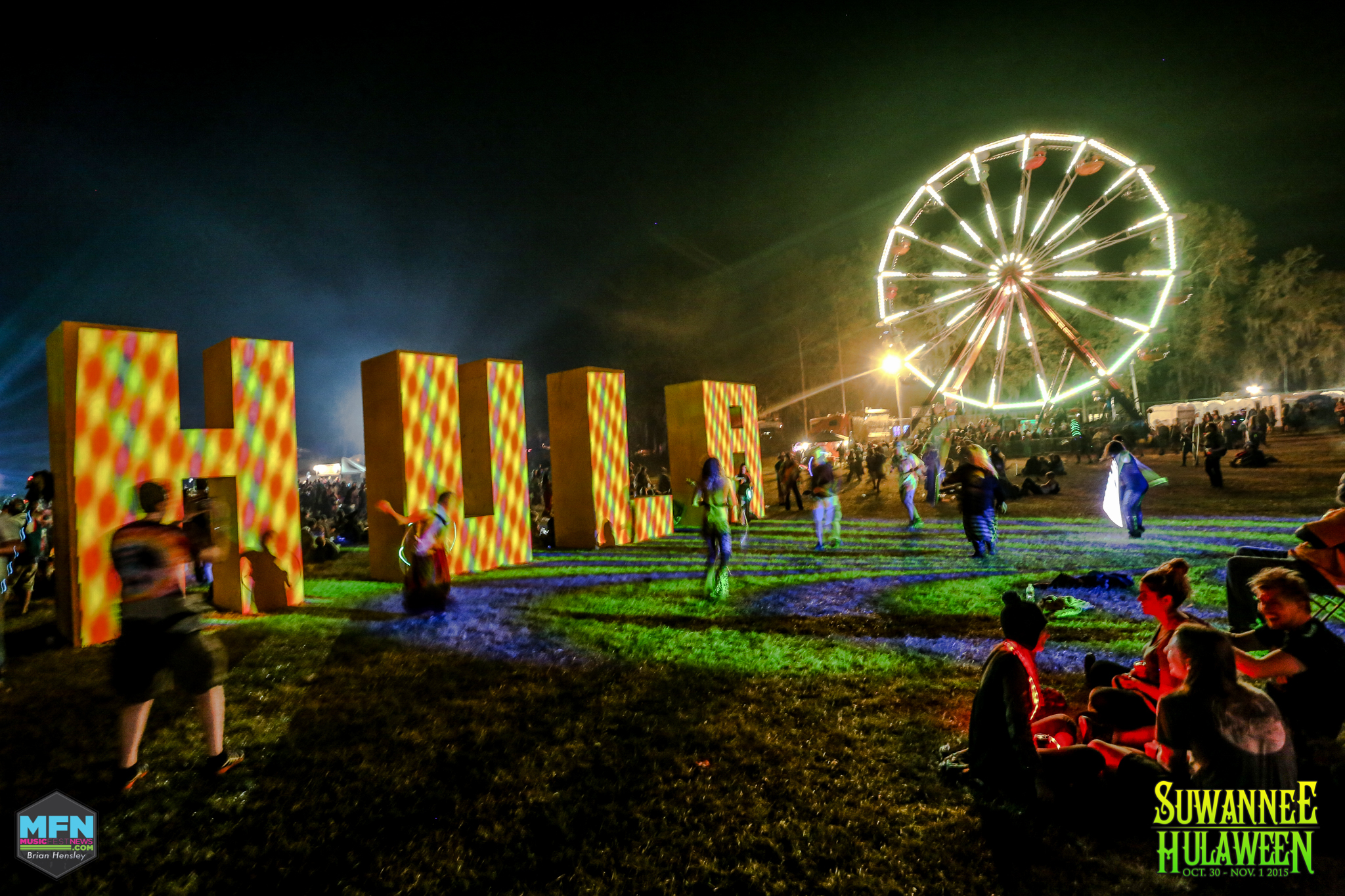 This Halloween weekend, I had the pleasure of attending the Suwannee Hulaween music and arts festival in Live Oak, Florida. A “feel-good” festival of sorts, the artists were mostly categorized as either jam bands or electronic acts/DJs, with a fair number of hip-hop artists interspersed throughout. Besides the expertly cultivated lineup/musical experience, the three main stages are situated around the ‘Spirit Lake’- a forested area full of art installations, live performances, workshops, and hammock spots with a beautiful Florida lake centerpiece. The inspiration I was able to reap from the weekend was unreal, as festival-goers were decidedly there to kick back, connect with like-minded humans, and express themselves at their fullest.

The String Cheese Incident, a jam band formed in 1993 in Colorado, has been putting on this festival for twenty years (five at this particular park). They cultivate Hulaween’s signature loving and supportive vibe over the course of the seven sets they sprinkle over the weekend, all on the festival’s main stage. Their final set on Saturday, historically a themed set, was dubbed “Night of the Loving Dead” and featured a medley of cover songs about how lovely it is to love and be loved- featuring songs from a variety of artists ranging from Led Zepplin to Beyonce to Sublime to The Beatles.

I could speak a lot about the experience of the festival, but I have often found festival explanations to fall in the category of ‘to he who was there, no explanation is necessary. To he who wasn’t, none is possible.’ Instead I will describe my favorite experiences from the weekend and the ones you are probably most inclined to find interesting: the best sets I ended up at, intentionally or not. Some personal highlights from the weekend:

Noname- A female rapper out of Chicago who is best-known for her collaborations with Chance the Rapper that started during his Acid Rap era and continue to the present. Her last tape Telefone started her solo career strong, and she is currently spreading her message of positivity and love on tour with a full band. The set she played was light and sweet while also carrying lyrical gravity, and the personal connection and eye-contact she was making with audience members showed her honest gratitude for the experience. She will be in Nashville at Exit/In on the 15th of November and though it is sold out I would venture to say the ticket would be a worthy investment. Her Tiny Desk concert is included below:

Lotus- I am always impressed when I see Lotus (having seen them twice already at Okeechobee Music & Arts Festival in Okeechobee, Florida), and this set was no exception. Their electronic-dance style is fast and neat, while somehow also toeing on the border of pure chaos. If you are into jam bands and electronic music and musicians who do not seem to ever tire, Lotus could be for you. Check them out below:

Space Jesus- Probably my favorite show I saw all of Hulaween. A Sunday afternoon womp romp, if you will, taking dubstep down to another level. Not only does his collaborative philosophy lead to a diverse repertoire of tracks, but it all manages to carry a wobbly dubstep sensibility only an alien could compose. I cannot say in words how much I danced at this set and how much I enjoyed it, so I have included a video of the entire set in this write up. Listen if you dare. (I also actually ended up walking up to a Space Jesus secret show at a fire igloo on my last night, a classic example of Hulaween magic at work).

Griz- I had heard of Griz before and even listened some to his music, but I was woefully underprepared for the set he played to finish out the festival on Sunday night. Not only were his samples on point (including Funkytown and Michael Jackson riffs), but his live saxophone jams and guitar were such a beautiful addition to the otherwise electronic palette. The groove did not stop and the creativity of the set inspired me to listen to Griz more regularly. An amazing choice for the final act. A song of his with fellow DJ Big Gigantic is included below:

Long story short, Hulaween served to refresh my faith not only in myself, but in music and its ability to set us free from our own minds, human individuality and expression, and the power of love for all. As Griz played the festival out with We Are the Champions and the thousands of attendees present linked arm and sang out our mutual celebration of life, I couldn’t help but feel that being a human isn’t so bad after all.