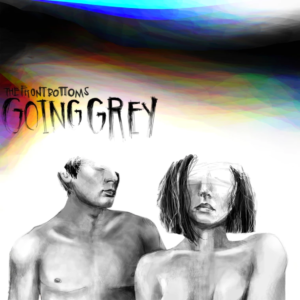 I guess I missed the day in class when we learned that “Going Grey” was synonymous with “Selling Out,” but thankfully The Front Bottoms (TFB) caught me up on that lesson with their album release earlier this month.  Gone is the TFB known for their trademark gritty sound, lyrical depth, and endearing awkwardness.  The new era of TFB is under strict dictatorship by their label, Fueled by Ramen, and it definitely shows in their catchy, over-produced pop-punk album, Going Grey.

I want to clarify that I actually love the new album: I know a bop when I hear it, and every track of the album is jammable in its own unique way.  But that being said, almost all of the elements of the band’s sound that attracted their earlier fan-base have been traded up in a ploy to appeal to broader audiences and incorporate more pizzazz.  While the signature, sad trumpets still play a prominent role in most of the songs (thank God), the band’s ramshackle instrumentals have largely been swapped for smooth, deliberate melodies, and Brian’s voice and vocal range have undeniably improved.  This is largely a betrayal of the band’s main charm, which came from their gravelly, unclean sounds—after all, their first album was recorded in a public bathroom.  The Front Bottoms’ raw emotion and plucky DIY vibes have been buried, and radio-worthy choruses and synths have grown in their place.

The first half of the Going Grey sticks (loosely) to The Front Bottoms’ classic sound.  The tracks “Peace Sign,” “Bae,” “Vacation Town,” and “Don’t Fill Up On Chips,” with their nostalgic vibe, trumpets, and weird lyrics, sound like more highly produced and over-simplified versions of songs that could have been on Talon of the Hawk (2013).  Of course the band has evolved since then, and I am a firm believer that, in the sphere of punk, a band changing sounds with age is generally for the best (with the obvious exclusion of Fall Out Boy).  Brian is almost 30—it’s ridiculous to ask him to keep writing songs about weed and college and unhealthy relationships and growing pains.  Plus, just because these songs don’t match the sound TFB fans grew to love doesn’t necessarily make them bad, and speaking as an avid pop-punk fan, I don’t mind that the band switched their indie-folk sound for something more audience-friendly.

“Grand Finale,” “You Used to Say,” and “Vacation Town” are all instant classics.  Beachy synths, velvety vocals, and distinctive sounds work together to make each of these songs standouts.  There is no song on Going Grey that I actively dislike or would skip if it came up on shuffle.  Overall this is not the album that TFB’s earlier fanbase likely expected or wanted it to be, but as a fan of theirs I can accept that, for what it is, it’s still pretty damn good.