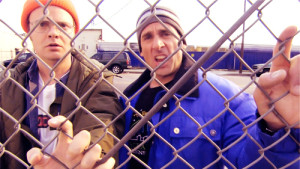 All of us have those TV shows we watch over and over. And if you are anything like me, those shows are comedies, and those comedies have weird parody songs in them. And if you are exactly like me, you probably know all the words to these songs and listen to them as if they were anything else on your iTunes. So here are a selection of my favorite songs from TV shows (in no particular order).

The fact that this is a parody of a parody song is possibly the most Michael Scott thing to ever exist. I only wish my orientation videos could be this fantastic.

It started as a single song in a single episode. It eventually became a full length music. Now, it is a television legend so grand Portugal. The Man played it on their Evil Friends tour.  Go to 10:00 to hear just the song, but I really suggest you watch the entire performance because it is life changing.

Most people probably know Robin Daggers/Sparkles from her first appearance on HIMYM with “Let’s Go to the Mall.” Don’t get me wrong, I love Let’s Go to the Mall just as much (probably more) as the next person, but PS I Love You is so incredibly spot on and ridiculous and hilarious that it felt wrong to exclude it from this list. Honestly I could probably write a separate article on Robin Sparkles, but if I can only pick one it has got to be this one.

Phoebe has a large catalogue of fantastic songs, but none of them takes the cake like Smelly Cat. Not only a theme throughout all 10 seasons of the show, but a cultural phenomenon in itself – at her show in Los Angeles, Taylor Swift brought Lisa Kudrow on stage to sing Smelly Cat.  And while you’re at it, don’t miss the glam version of Phoebe’s Smelly Cat.

A song by what may be the greatest fictional TV band of all time, Mouserat. Led by our lord and savior Chris Pratt. I would be lying if I said this song didn’t make me tear up. RIP Lil Sebastian.

The song loses something without the video of Jane Krakowski dancing (which unfortunately is not available on YouTube), but is still incredible nonetheless. I mean, it was Number 1 in Israel and Number 4 in Belgium.