Before the out-of-nowhere snowstorm that caused Interpol to be stranded for 50 hours, I had the pleasure of seeing Interpol at Marathon Music Works on the unusually chilly night of November 11. I went over to the venue and was immediately greeted by a large, excited crowd. What came after definitely did not disappoint and made my Tuesday night go from ordinary to extraordinary.

Even upon opening up with “Say Hello to the Angels” Interpol created an ambiance that continued throughout their whole show. Immediately, the entire crowd was captivated at lead singer Paul Banks’s hypnotic voice, backed with dim lights and fascinating visual display. After that song I knew it was going to be a great show.

In fact, it was good enough that a girl in the crowd contacted a friend via Facetime who proceeded to enjoy the concert about as much as anyone can over an iPhone. As the show went on, I was very pleased with the visual artwork that the band used. They stuck to their color scheme of red, black, and grey, similar to the cover of their latest album, El Pintor. Some of the scenes were from their music videos, while others were catered towards the particular song at the time. They even had cameras around the stage that filmed their actions in an incredibly abstract manner – only showing their glowing outlines, layered upon their instruments. 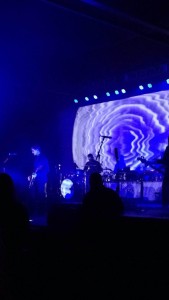 The best songs they performed were probably Everything is Wrong and the entirety of their encore, which consisted of “All the Rage Back Home,” “NYC,” and “PDA.” The energy was at its peak during the encore, which many bands do not usually achieve, but for Interpol it appeared natural. In fact, I thought that there were some songs during their set that lacked the depth and richness of what it sounded like in the album. However, the encore proved that they knew how to put on the show.

The concert came to a close with the chanting of “turn on the bright lights” during “NYC” accompanied with flashing stage lights aimed directly at the center of the audience. It was a glorious way to finish off.

I was impressed with Interpol’s performance. There were some times where they seemed like they lacked the complexity heard on their albums, but they made up for it with their energy, visual art, and usual charm. And if you were bummed you couldn’t go, check out the rest of their tour dates or at least watch their latest music videos (seen below) that accurately conveys the good vibes at that awesome concert.