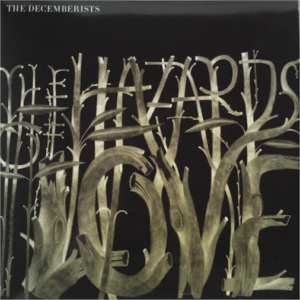 The Hazard of Love, by The Decemberists, from progarchives.com

If you’re a Decemberists fan, you’ve probably sung along to the folk anthem “Down By The Water” on a Sunday drive. If you’re an avid fan, you became intimate with their chart-topping 2011 release The King is Dead and have been a regular listener ever since. And if you’re a hardcore, there-for-every-show-marry-me-Colin-Meloy fan, then there’s a chance you’ve heard of their 2009 album The Hazards of Love.

The reason that The Hazards of Love is not familiar to many Decemberists fans is its inaccessibility: if you were to shuffle the entire library of The Decemberists on Spotify and came across a track off of The Hazards of Love, you would most likely question the nonsensical direction of the song and play it off as an early experimental “before they got good” phase. In truth, you’ve missed a lot. You inadvertently opened a book to a random chapter and started reading, with no context. This is true of many concept albums, but not many concept albums go so far with story-telling to compare it to an intimidating classical art form: German Romantic Opera.

In fact, Colin Meloy, lead singer and principal songwriter of The Decemberists, originally conceived The Hazards of Love as a play. His poetic text mimics that of other playwrights who would pimp out their works to be used as librettos in an opera. It was only a matter of time before this successful songwriter would put music to his text, creating a fantasy rock opera. Our story begins when a young woman named Margaret stumbles upon an injured fawn, who, upon approaching, turns into a man. The two fall in love and immediately conceive a child. Not only does this fantasy-inspired, star-crossed-lovers narrative coincide with what one would expect from an opera, but the music is obviously inspired by the art form as well. German Romantic Opera was the first to incorporate recurring motifs (which is just a fancy music term for a character’s “theme song”). For example, the music that follows the young couple throughout the album introduced in “Isn’t It a Lovely Night?” is a folk-country waltz, complete with banjo and harmonica—the perfect auditory contribution for a romantic campfire retreat setting.

Their romantic bliss is soon interrupted by The Forest Queen, adoptive mother of William, the shape-shifting forest dweller. Her theme song is a heavy metal guitar riff, over which she belts her powerful, scolding aria, featured in “The Wanting Comes in Waves/Repaid.” She insists that William terminate his relationship, but he asks for one more night with his love, and to spend his time with her as a mortal. She grants his request, but William soon finds out that Margaret has been abducted by The Rake, a damaged widower who killed his three children and now lives in the woods. His theme, featured in “The Rake’s Song,” is a Green Day inspired power chord progression (perfect for an angsty villain if you ask me). William finds The Rake’s lair, where he discovers that the antagonist has already been killed off by the ghosts of his dead children. Bummer. Since their night together is almost over, William and Margaret make a suicide pact and drown themselves in the river so that they will be together forever…despite the fact that Margaret is pregnant. But honestly anything can happen in opera, and a tragic ending is almost guaranteed.

A lot of avid Decemberists fans bash the album for being too “out-there,” which is probably a response to the fantastical plotline, and the styles featured in the album that are atypical for The Decemberists. I am not the most well-versed in The Decemberists’ repertoire, so my first experience with the album was a wonderful way to spend an evening. I felt like I was listening to an audiobook or the soundtrack to a play. And if it featured powerful, heavy vibrato vocals, I would undoubtedly be listening to an opera. The Hazards of Love is a great way to bridge the gap between popular music and opera, and I encourage anybody who is intimidated by opera to try out this album first.