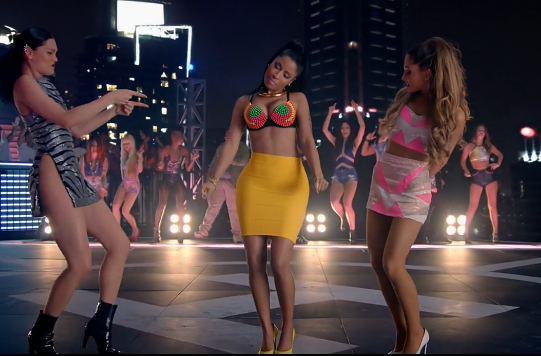 We recently had WRVU members vote for the best and the worst song currently in the Billboard Top Ten. Here are the results from the 17 WRVU-affiliated responders. Hopefully their comments will shed some light on the current state of pop music.

It’s meant to be an anthem for being proud of your body. In reality, it’s a sexist, patronizing, body-shaming, judgmental hunk of drivel. It enables people to lie to themselves that they are perfect if they are overweight.
-Will Doran, Graphic Art Director

It’s a complete novelty. Zero longevity. Another Call Me Maybe but not as much fun.
-Bo Kennedy, trainee

Saccharine production, a cringeworthy music video, and an utterly inane message disparaging self-improvement. It’s great that Trainor has loads of self-confidence but that doesn’t mean we deserve to be subject to it.
-Zach Shealy, Program Director

I hate this song so much. I am also really confused by it. The lyrics read like a bitter art school project aimed at the established music industry, but it is clear that whoever produced this was a professional. I don’t know who thought it was a good idea to financially back this horrible singer and this corny, cliche accompanying instrumental, but in a strange way they have succeeded. The Billboard is topped by utter garbage right now, so congratulations on the smooth industry move, whoever you are.
-Brett Tregoning, Staff Writer

Iggy goes Eminem in subject matter and angry tone. I don’t like when Eminem does that, much less when a rapper with a fraction of Eminem’s technical and lyrical ability tries. I’m just not down with Iggy. Beat’s not interesting either. I don’t remember much of it even 10 minutes after listening to it.
-Nick Kline, Music Director

Most generic melody I’ve ever heard in the chorus.
-Logan Wilke, General Manager

I hate everything about Iggy, the end.
-Erica Comer, Archive Director

Nicki Minaj took the most annoying riff of Sir Mix-A-Lot’s song and decided it would be a good idea to make it a recurring motif in ‘Anaconda’. Her rapping was mediocre at best, and it seems like the general goal of the song is not to be actually good, but instead to try to somehow slither inside your head and latch on for as long as possible. I think the song is called ‘Anaconda’ not because of the reference to Sir Mix-A-Lot, but rather because it squeezes the life of anyone who listens to it.
-Roshan Poudel, Staff Writer

‘He toss my salad like his name Romaine.’
-Austin Lyons, Online Director

The vocal editing is so strong that Grande sounds more like a robot than a human and her words are slurring. And we’ve heard this Zedd instrumental in how many ‘different’ songs by now?
-Lucas Kunsman, Alumnus

This TSwift song is just the best. It’s so joyous and confident. Even the parts that made me cringe on first listen add to it the more I listen to it, probably because of their unabashed goofiness. Found that really endearing. Now I’m gonna be humming the pre-chorus and chorus all week.
-Nick Kline

A stunner of a hip hop hit showing no signs of wearing thin despite its recent ubiquity. Great verse from YG, great beat, great hook. Jeremih manages to seem like a badass and a heartthrob at the same time.
-Zach Shealy

Not even Nicki can bring this song down. Jessie and Ariana are two of pop’s biggest and best voices, and ‘Bang Bang’ is a total jam.
-Austin Lyons

This is a great upbeat, catchy tune. Nicki Minaj has a verse on it as well. Featuring on one verse always seems to be where Nicki Minaj shines brightest.
-Brett Tregoning

We didn’t receive any comments for this one, so here’s the intense music video:

Subdisco-house is making a comeback.
-Will Doran

It is my jam. I do not even care. This song is my jam.
-Erica Comer

Sam Smith provides a solid vocal performance, and although the backing instrumentals are not entirely interesting, at least they do not take away from his performance. The back-ups from the gospel-ish choir were a pleasant surprise as well.
-Roshan Poudel

Sam Smith made soul cool again. The artist and his debut album were clearly groomed to be top 10 material, but it really doesn’t matter when he can sing like he can.
-Bo Kennedy