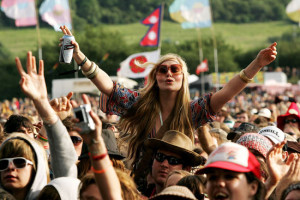 For many students, the opportunity to spend a few days in a sweaty music-frenzy won’t begin until a few weeks after a mind-numbing week of Finals is over with. To get ready for this year’s summer music festival season, I have compiled a list of 10 songs that capture the simple and carefree spirit of festivals like Bonnaroo, Lollapalooza, and others like them.

“Walking On A Dream” – Empire of the Sun

We’ll get this list started with Empire of the Sun’s classic electro-pop hit from 2008.

Signed onto Glassnote Records with bands like Phoenix, Two Door Cinema Club, and Mumford and Sons, GIVERS are starting their ascent of the indie rock ladder to festival royalty. If they keep churning out infectious hits like “Up Up Up”, we shouldn’t be surprised to see them have similar success as their label-mates.

Passion Pit has no problem electrifying crowds with hits like this.

Bombay Bicycle Club’s earwormy hit, “Shuffle”,  from the album A Different Kind of Fix exemplifies the British band’s move away from their post-punk influences, towards a more festival-ready synth pop sound.

The first track off of the 2009 album,Wolfgang Amadeus Phoenix, “Lisztomania” served as the introduction to the “indie-rock” genre for many fans.

“Cough Syrup” and “My Body” off of Young the Giant have received enough attention already– so we’ll show a little love to “Strings”.

Vampire Weekend have rocked many festivals stages with this quintessential hit.

Hip-hop duo OutKast is reuniting for some of the most anticipated festival performances this summer; so 2003’s “Hey Yeah” is especially relevant right now.