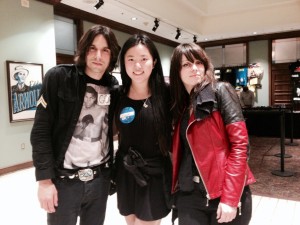 The Last Internationale opened for Weezer this past Saturday and Sunday at the Ryman, which concluded their tour with Weezer. As a recently formed band that played their first show only two months ago, The Last Internationale have garnered a reputation for playing rock music laced with politically charged lyrics.

Lead singer Delila Paz first came on stage and performed “Workers of the World Unite,” a stripped down song that showed off her soft and haunting vocals. The title, which alludes to the popular political slogan, highlights the wicked truth about the American dream. This anthemic piece prepared the audience as other band members Edgey Pires and Brad Wilk (drummer of Rage Against the Machine) took the stage and started rocking out with other songs off of their EP New York I Do. My favorite was their new single “Killing Fields,” it definitely got the crowd pumped.

I had the opportunity to speak to the Last Internationale after their set (AKA I had the opportunity to awkwardly stutter questions because I’m awkward inside and out). As a Jersey girl not too far from the city myself, I was excited to speak to them about NYC and their favorite venues to play in, as well as their experience in Nashville so far. Like most of us, the Last Internationale was definitely pumped about the ever-changing music scene here in Nashville, pointing to the Third Man Records coming to Nashville as a big turning point for the Music City. (P.S. Weezer recorded a new version of Suzanne at Third Man Records the day of the concert, which you can hear snippets of on Weezer’s Instagram account.)

Check out The Last Internationale at their website thelastinternationale.com for links to their new music, as well as a free download of their new single “Life, Liberty, and the Pursuit of Indian Blood.” Another link with their bio: http://www.bbgunpress.com/artists/the-last-internationale/.

Weezer were super cool to see live–Pinkerton nearly brought me to tears. It was a really special night, starting off with a set of greatest hits, followed by some old never-seen-before footage of the band during their Pinkerton tour, and then Pinkerton from start to finish. The crowd was full of die-hard fans that shouted all the words and sang all the guitar solos, and it was clear that everyone enjoyed Weezer’s night of memories. The performance was really great, and (I think) a pretty cathartic experience for all involved.

Thanks for WRVU for sending me out to check out The Last Internationale, it was a ton of fun and I’m looking forward to following them in the future!