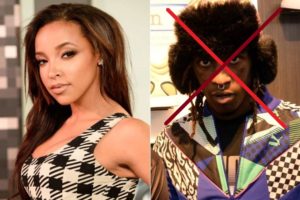 Originally, this blog post was going to be a review of Tinashe’s newly released commercial mixtape Nightride. While I quite like the mixtape, something so atrocious happened during its production that it entirely consumed the contents of this post.

Young Thug played a major role on the track: the first line, ad-libs, and a verse that perfectly fit. Tinashe and Young Thug seemed like a duo made in the heaven of a drug filled club night, which quickly made “Party Favors” one of my most listened to songs of this year. Listening to a track a million times ingrains it so hard into your memory that any deviations are immediately noticeable so I felt betrayed the moment the mixtape version played. Gone was the first line. Gone were the ad-libs. Gone was the verse, replaced with a refrain that could never truly replace the goat. Part of my major issue is that Young Thug’s ad-libs essentially were part of the beat. The mixtape’s beat no longer feels complete to me and has made it the lesser version in my eyes/ears.

My disappointment reflects the danger inherent in changing tracks after they are released for the first time. A similar experience could be found with Kanye West’s “Wolves”. First played at Yeezy Season 1, the track grabbed me. Relying on Youtube rips, I listened to the song on repeat for weeks. Around a year later, The Life of Pablo version of “Wolves” was released. Gone were Vic Mensa and Sia, replaced with a meme creating verse by Kanye. “Wolves” was originally an almost perfect song. The new version sounded completely wrong. Clearly I was not the only one disappointed, as Kanye went on to “fix Wolves”.

The term “Remix” could completely change my perception. Had Nightride’s version of “Party Favors” been released first and a Young Thug remix released second, I might have appreciated the original more while still preferring the remix. “Wolves” was fixed by combining the first and second releases and changed my perception of Kanye’s below average verse.

Perhaps artists should only release a track when they know it’s perfect, or maybe artists should pump out as many versions as they want. Or perhaps I should just listen to the version I enjoy more.