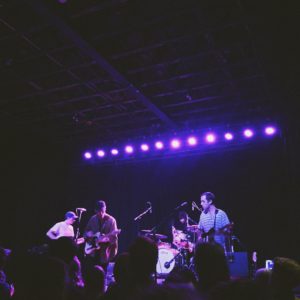 My Wednesday started last week with my professor cancelling my 6-9pm class so that he could watch the Cubs game.  I was pretty pumped because having a three hour class on Wednesday nights is beyond brutal, but on top of that, I received a text from my friend Haley begging me to go with her to see Wild Nothing perform that night. While I had never heard of the band before, my love for discovering new music inclined me to say yes, and I am so glad that I did.

Haley and I arrived to the concert five minutes before the opening act, Small Black, was supposed to come on. The concert was at Exit/In, one of my favorites in Nashville. The venue is incredibly small and intimate, and no matter how far back you go or how packed the venue is, you still can have a great view of the performers regardless of where you are standing. On top of that, there are the names of all previous performers at the venue on the walls, and it was really cool seeing many famous names that I never would have guessed to have started off performing at a venue such as Exit/In.

Small Black came on almost immediately after our arrival, and while I do not believe that I ever would have chosen to listen to them on my own, I have to say I was a fan of their music. Their music can be described as electro-indie pop. The track, “Free at Dawn,” was incredibly calming and peaceful to listen to, with just a perfect hint of synth drums to add to the song. Some other notable songs from their performance were “No Stranger” and “Boys Life”.

After Small Black’s great start to the night, I was super excited for Wild Nothing to come on, as I had a feeling I would really like their sound as well. The band opened with “To Know You,” a song with a catchy beat comprised of drums, bass, and synths. Some of my other favorites included “Shadow,” a song with some of the most beautiful instrumentals I have heard in a song. It left me feeling a wave of happiness and dreaminess wash over me. I also was a fan of the song that they closed with, “Summer Holiday,” an upbeat song which features vocals that the whole audience seemed to enjoy singing along to as well.

Overall, Wild Nothing’s sound can be described as dreamy indie pop music, and I left the show in such a pleasant mood as a result of their serene sound. All in all, I am super glad that my class got cancelled and my friend basically begged me to go with her to the show, because I got two great new artists to add to my Spotify as a result of it. If you are interested in listening to Wild Nothing, check them out below.