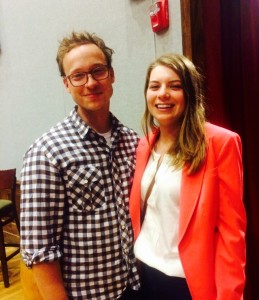 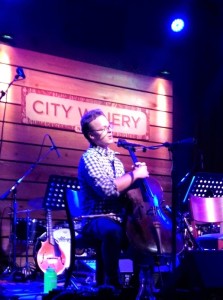 On Monday evening, City Winery Nashville was graced with the presence of Ben Sollee and Mother Falcon, who performed the second show of their collaborative tour The Fall Migration. Ben Sollee, cellist, singer, composer extraordinaire, took the stage with a “super-band” of 14 (ish) musicians: himself, drummer Jordan Ellis, and the members of Austin-based orchestral band Mother Falcon. Together, they opened the show with “Something, Somewhere, Sometime” a track off Sollee’s 2010 album Dear Companion. In addition to being a talented musician, Sollee is a passionate environmentalist. The aforementioned album, Dear Companion, is entirely dedicated to the problem of Mountaintop Removal coal mining.

Ben Sollee and Mother Falcon performed their 90 minute set with a conversational fluidity. It seemed as if these acts had been playing together for years; it was incredible how such a large group of musicians could be so perfectly in sync. The “super band” lived up to the name, producing a full sound which filled the cavernous room.

Though a large portion of the show had both acts on stage, each took their turn in spotlight. A highlight was when Sollee played a few songs solo, accompanied by a drummer using a wooden box as an instrument. Even on a seemingly empty stage, Ben Sollee is a captivating performer – his charismatic personality translates to his music. He kept the crowd engaged by telling stories between songs. From following a redhead to California to crashing a karaoke bar with his bandmates, he created a personal connection with his audience. The crowd even convinced Sollee to reenact the night in the karaoke bar by playing their reggae cover of Prince’s “When Doves Cry”. 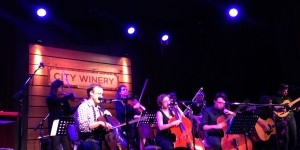 The versatile talents of Mother Falcon became even more apparent when they controlled the stage. The group includes all the major instruments, winds, guitars, strings and even an occasional accordion. At least four different members lent their voices to songs, and several changed instruments during the act. Their performance style was a loosened-up version of a classical orchestra, reminiscent of Jazz big bands. Mother Falcon plays “symphonic rock”, but even that does not quite describe their complex musical style.

Ben Sollee admitted as well that he does not restrain himself with genre definitions. Sometimes he plays folk, sometimes soul, or bluegrass, or pop. Our generation’s accessibility to all kinds of music has created more gray areas in terms of genre. But in my opinion, a variety of influences make for better music. I admire the way the Ben does does not take himself too seriously, on or off stage. It is clear he truly enjoys performing. From the second row, you could see him break out into smile mid-song, because he knew how good it sounded.

An amazing performance like that really makes you wonder why such a talented, passionate group of people is not topping the charts. Even so, Ben Sollee and Mother Falcon have a growing fan base. With Sollee’s work on movie soundtracks and ballet scores, he is on his way to becoming a household name. Just last week, Mother Falcon released a new album Good Luck Have Fun. Together, these musicians are making the classical music style approachable for the average listener.

While Mother Falcon and Ben Sollee are strong acts alone, their collaboration brings a new depth to their music. I highly, highly recommend you catch them on tour. Without a doubt, this combined band is worth seeing live.

I had the chance to speak with Ben before the show. After our interview, I came to the conclusion that he is one of the most genuine people I have ever met. His wide-ranging interests in activism, dance and technology really distinguish him from other artists.

I encourage you to check out Sollee newest project “The Vanishing Point” a virtual reality music app at bensollee.com

Listen below for the uncut interview with Ben Sollee. It’s very casual.  We talk about upcoming projects, the tour and his opinion on pockets. Enjoy!