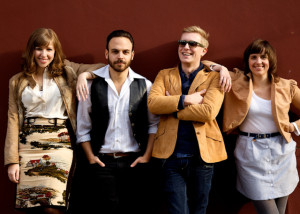 Lake Street Dive graced Nashville with their presence yet again this past Saturday at the beautiful Ascend Amphitheater. Unfortunately for the Lake Street Dive fan, however, they were only opening for Grace Potter. Luckily the group drove a large and enthusiastic crowd that showed up early. Despite their position in the set, Lake Street Dive owned the stage and played a fantastic hour of music.

For those of you who haven’t heard of Lake Street Dive, they are a quartet that met at the New England Conservatory of Music and they have been jazzing up the indie pop scene since the mid 2000s. They are most famous for their cover of The Jackson Five’s “I Want You Back,” which to date has garnered about 3,300,000 views on Youtube. 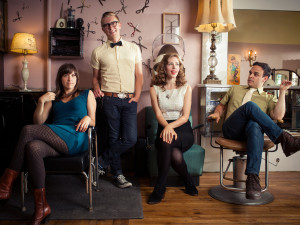 The show on October 10 was part of a second round of US touring, as they have been working on material for an upcoming album. The show started right at 7:30PM, surprising because it was not quite dark yet. The lights dimmed, and the crowd started cheering. Lake Street Dive slowly made their way on stage, with the air of humility and endearment fans have come to love. It also helped that lead singer Rachel Price was on her old stomping ground, as she grew up in Hendersonville.

Lake Street Dive opened up energetically with “Stop Your Crying” and “Bad Self Portraits.” From there they played various songs off “Bad Self Portraits,” an Annie Lennox cover, and, most interestingly, two songs that will be released on their next album. One was “I Don’t Care About You,” which drummer Mike Calabrese wrote. It had a slightly different, more aggressive sound than I am used to from the group (understandable from the drummer), but I was hooked. It still retained characteristics we’ve come to know, especially a chorus that the audience could sing along to while Rachel virtuosically improvised on top.

“Just Ask” was especially beautiful at Ascend. The outdoor setting, mixed with the liberties Rachel took with the melody, made it seem as if the song was made for the venue. Unfortunately, Lake Street Dive didn’t receive the treatment they deserved as the openers. The lights were dim on stage, the master audio level was low enough to easily hear conversations from neighbors, and the live feed screens were off. However, the skill and energy of Lake Street Dive overcame these technical obstacles, and their hour set felt like 15 minutes.

Because this was my second time seeing them, I was expecting the banter, the solos and showcasing of each member, and the casual friendliness of the band. I left feeling excited for their new album and for the next chance to see them headline. Hopefully next time we will see Lake Street Dive at the top of the bill at Ascend, because anyone who saw them on Saturday knows they deserve it.