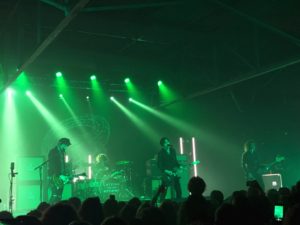 On Saturday night, I experienced one of my favorite concerts in my entire concert-going career with a band that I least expected. While I have seen Catfish and the Bottlemen perform live before and enjoy listening to their music, I would not place them at the top of the list of my favorite artists. However, I promised my friend and favorite concert-buddy Haley that I’d go with her because they were on her bucket list of bands to see live.

The concert was originally supposed to be held on October 27, but it got rescheduled to last Saturday, December 3, as a result of one of the band members getting sick. This rescheduling did not have any impact on the quality of Catfish’s performance. We decided to skip the opening act, The Worn Flints, although when we arrived at Marathon Music Works, individuals around us were raving about how much they enjoyed their performance. After looking into their music a bit after the concert, I discovered that they are a psychedelic rock band with really unique music.

Shortly after our arrival, Catfish came on and opened with their hit, “Homesick”. I wasn’t super familiar with the song, but I do believe that it was a perfect way to begin their performance. The first verse begins slowly with just vocals and guitar, then gradually adds in bass and drums, and then the chorus immediately changes the mood to a full-on rock jam song. Right off the bat, the amount of energy that Van McCann, the vocalist and lead guitarist, displayed was insane. McCann was jumping all over the place and having a great time jamming on his guitar, and the audience loved it.

Next, they performed their most well-known hit and my personal favorite, “Kathleen”. In my opinion, the song is just a perfect combination of great lyrics and musical style, and the band did not disappoint with its live performance. I honestly thought that it sounded identical, if not better, than the studio version of the song. Among my other personal favorites of the night were “Pacifier”, “Oxygen”, and “Hourglass”. During “Hourglass”, the entire band left the stage to let McCann give an acoustic performance. I really loved “Hourglass” because at surface level, it seems like a calm and mellow song, but when you actually look into the lyrics of the song, you really can hear the pain and emotion in McCann’s words.

Catfish ended the night with “Cocoon” and “Tyrants”. “Tyrants” was a great closer because it seems like it comes to an end after the final chorus but then surprises you with a vibrant and charismatic instrumental portion. During the instrumental portion McCann was running around the stage, holding his guitar over his head as he played it, and just having a great time. Finally, the instrumental came to a close and they rounded out the song with a final repeat of the chorus.

Overall, I thoroughly enjoyed Catfish and the Bottlemen’s concert. The simple, iconic alligator back-drop, bright flashing lights, and immense energy from the band members made their performance the ultimate rock concert, and I am excited to see where the band goes from here. Check them out below if you haven’t heard their music yet.