By a stroke of luck, I ended up winning a pair of tickets to the Cold War Kids’ concert in Nashville this past week through a WRVU giveaway. So, on Friday night, I ventured out to Marathon Music Works to watch their Hold My Home tour. I entered the venue to a surprisingly packed audience. Per usual, I weaseled my way as close as possible to the opening act, Elliot Moss.

Though I missed part of the act, what I did see was exciting. Before the show, I only knew Elliot Moss from his song “Slip,” but I was tingling with anticipation at the thought of seeing the life performance. Marathon Music Works has a tendency to be a loud crowd, and I was worried about his voice fading out amongst the chatter. Instead, Moss set the mood for the rest of the concert. By easing into the concert with his quiet energy, Moss outdid my expectations. My personal favorite of his ended up being “I Can’t Swim.” Definitely be on the look out for more of Elliot Moss in the future — he’s yet to release his upcoming debut album, but Highspeeds is definitely one to watch out for.

After a brief intermission, the Cold War Kids made their appearance on stage one by one. Set amongst a muted background and not making much of an entrance, I wasn’t really sure what to expect. I’ve been a fan of the Cold War Kids for a long time, but I wasn’t super knowledgeable about their latest album. Then, without a word, they broke out into their first song. Here’s a breakdown of my thoughts on a few of the songs they performed:

1. Miracle Mile: As my personal favorite from their 2013 album Dear Miss Lonelyhearts, “Miracle Mile” was a superb and strategic choice to transition into their new material. With this their second song, they warmed up the audience with the upbeat energy and set the tone for their new album.

2. All This Could Be Yours: The band got super into the performance with this one. Nathan Willett gave it his all with his theatrical rocking around the stage. It was stuck in my head for the rest of the night after the concert, and I honestly haven’t been able to stop listening to it since. The way Willett’s powerful voice carried through the venue made this one stand out.

3. First: I don’t know how I missed this one before the concert, but this was my favorite of the band’s new material. With the acoustics of Marathon, the guitar in the background reverberated through the crowd. The audience clapped along rhythmically. Seeing audiences and artists work and sing in unison is always powerful to see, and this song was no exception.

4. Hang Me Up To Dry: Hands down their most popular song, “Hang Me Up To Dry” commands the attention of the audience in the way none of their other songs do. Though I’m sure they’ve performed it hundreds of times, “Hang Me Up To Dry” was still fantastic. The angst is palpable — everyone can relate to it, and everyone feels the intense energy the band’s performance brings.

5. Louder Than Ever: This song, man. Always will be my all time favorite. The performance of this one was absolutely stinging. It was a great; the whole room was rattling, and the crowd quieted down as the percussion and guitars roared. 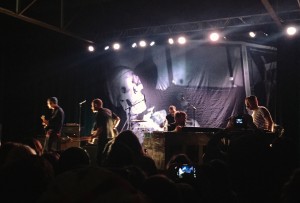 The view from where I was standing

All in all, the Cold War kids’ performance was solid. I’d give it an 8/10. It’s definitely worth your time to go if you’ve got the opportunity to see it.