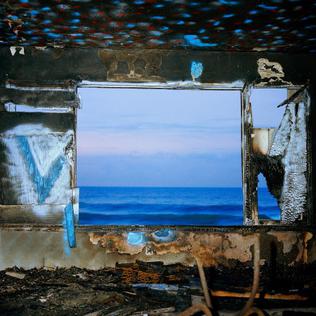 I’ll start by saying that I like Deerhunter. And while Monomania may have felt a bit overlong and undercooked, I’m reasonably convinced that their 2010 album Halcyon Digest is one of the best albums of the 2000s. I say this to give some context to lavish praise I’m about to heap onto their new album, Fading Frontier.

To start: Fading Frontier is better than Halcyon Digest, which is saying quite a lot. Fading Frontier a carefully crafted 36-minute masterpiece, filled with inventive songwriting, melodies that surprise you at every turn, and the best, most striking set of lyrics Bradford Cox has ever written.

It’s hard to separate Fading Frontier from the life-threatening car accident that frontman Bradford Cox had last year, which he said “erased all illusions for me.” And like a number of my favorite albums (The Moon & Antarctica and Benji come to mind), it’s an album that centers itself on life, death, and what comes after. Cox’s lyrics are sharper than ever, using line breaks and stretched syllables to highlight the thin boundaries between those three states. “And when I die, there will be nothing / To say” he sings on “Breaker”, the second line causing you to reevaluate the first.  Fading Frontier is full of moments like these, as Cox’s vocals challenge linearity and force you to constantly reevaluate your understanding of his words. He does this most effectively with the gender-bending father on the brisk, power-pop opener “All the Same”: “My friend’s dad got bored / Changed his sex and had no more / No more wife, no more kids / Nothing to live with”, the end of each line bleeding into the next.

But this is also Deerhunter at its most poignant and intimate. On the aforementioned “Breaker”, Cox isn’t afraid to open up to the listener with a lyric like, “Jack-knifed on the side-street crossing / I’m still alive, and that’s something”. The oddly hopeful ambivalence with which he confronts his own fragility is powerful, and nowhere is this more striking than in the album’s centerpiece “Leather and Wood.” Cox’s heavily-reverbed and crisply-enunciated vocals glide dreamlike on the song’s haunted chord progression, carried by a piano and augmented only by sparse drums, rubber-band synthesizers, ethereal creaks and possessed-sounding electronic chirps. It’s a weird song, to tell the truth, but it’s also the most affecting song Deerhunter have ever written. After recalling the car crash (and curiously changing how the accident happened), Cox sings something that I never thought I’d hear unironically on a Deerhunter album. “I believe we can fly, I believe anything is real / I believe we can die / I believe we can live again.”

What is also staggering about Fading Frontier is how it sounds exactly like Deerhunter despite the fact that it sounds entirely different from the noise-rock and shoegaze of their early albums, the basement-dwelling Halcyon Digest, or the schizoid Monomania. At times it sounds closest to the sonic richness of Cox’s 2011 album Parallax (released as Atlas Sound), but with tighter songwriting and a stronger percussive drive throughout. Deerhunter’s rhythm section (Moses Archuleta on drums and Josh McKay on bass) is a real treat here, subtly pushing each song along with a vigor that perfectly complements the dreaminess of the album.  But Deerhunter’s obsessiveness encourages you to uncover more and more of each song’s instrumentation with repeat listens, be it the Vibraslap on “All the Same,” extra-terrestrial beeps on “Ad Astra”, or the deeply buried organ on “Duplex Planet”. And that’s just the small stuff.

There are more grand moments of revelatory musical genius on Fading Frontier than I can count: the bridge on “Duplex Planet”, where the entire song converges around a harpischord; the drum entrance on “Living My Life”; the outro of “Snakeskin”; the switch from Cox’s voice to Pundt’s for the chorus of “Breaker”‘; the chord progression of “Leather and Wood”, which is every bit as chilling as the four chords of Radiohead’s “Idioteque”. And at 36 minutes long, Fading Frontier is long enough to not feel short and short enough to not feel long.

At the end of the album, “Ad Astra” concludes with a curious bit of interpolated folk music about a man who wishes he were a “mole in the ground”. This strange desire is picked up by the album’s closer, “Carrion”.

“I will dig my hole / I will become a mole”, Cox sings, but the dream goes sideways — “It’s much too deep / It’s much too deep / What’s wrong with me?” The self-imposed isolation characteristic of Cox’s earlier life is challenged and exposed here, thrown into light by the car accident that hangs over this album like a pall. By the end of the song, Cox is practically screaming “But I dug too deep / I cannot see / I cannot see / What’s wrong with me?” over 6 feet of static and dirt. It’s a moment and metaphor that’s beautiful in its sincerity and weirdness. To find Cox so exposed — rather than fighting off any and all challengers, as he has before — is a large part of what makes Fading Frontier so powerful.

This is a pitch-perfect album, folks, and, while I could talk for even longer, I’d encourage you go listen to it right now. And while I’ve been linking to the individual songs throughout this review, I cannot express how much this is an album, a collection of music that is greater than the sum of its parts, best listened to as one piece and in one sitting. Listen to it often, too, because at every turn and at every level, Fading Frontier is the gift that just keeps on giving. It is simply one of the best albums I have ever heard.