If you were to travel back in time to the year 1968 and cryogenically freeze the guys of The Band, only to wake them up in the year 2015, you’d probably find them hanging out with the members of Houndmouth. Both groups are harmony heavy, folk-funk powerhouses. While The Band spent a whole bunch of years touring with legends like Bob Dylan, and recording a massive repertoire of legendary jams, Houndmouth is just now coming up out of Indiana with their second album, Little Neon Limelight, dropping on Rough Trade earlier this week. 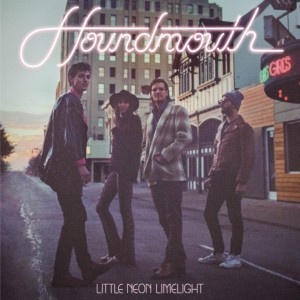 This album is a bit of sidestep (in the direction of “HIGH VOLTAGE ROCK AND ROLL”) from their folksier debut, and in my opinion it’s a solid move. But just like the first album, gripping stories and fun vocal arrangements are what make this one shine.

Single, “Sedona,” opens up the album with a soft pulsing guitar riff that soon falls into pace with a galloping little beat and thumping bass line. The song builds up gradually over a couple nifty, catchy, little choruses before the band really lets loose vocally, begging the dying old Arizona film town to “cut a deal” with them before it is lost and forgotten for good. If there were a song on this album that could make Houndmouth a household name, it’s this one. But still, it’s probably not my favorite.

“My Cousin Greg,” on the other hand, is a real doozy. All four members of Houndmouth write and sing lead on a selection of songs, but “Greg” is a rarity, as they each take up their own verse. The song tells the tale of a “greedy son of a bitch” named Greg who hangs around with his “physicist buddies,” one of which “lives vicariously through his mathematics.” The lyrics are nonsense, but the good kind of nonsense; one line describes a man with “a heart that’s made of brains;” brilliant. I’ve already compared these guys to The Band, and I’m about to do it again because come on, go listen to this song. The influence is undeniable. With a super funky guitar lick riddling through the zany verses that each build up to a beautifully lifted chorus, “Greg” could go right along “The Weight” in an awesome road trip playlist. The crew harmonizes over the huge (possibly prophetic) lines “if you want to live the good life, then you better stay away from the limelight.” I’m not positive if this song is genius, but I’m pretty sure that I love it, and I really want to believe that that chorus is saying something. Like a lot of this album it’s just good fun.

That’s just it; Houndmouth is a fucking fun band (especially so in a live setting; oh gee wow). And that’s not to say that they lack something meaningful to say (see “Darlin’” or “Gasoline” for some real feels). Little Neon Limelight is worth a listen as I think there’s enough variety on the album that almost anyone could find a track they really love.