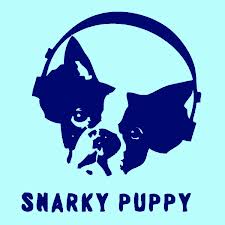 Combining elements of jazz, electronica, rock, and everything in between, Snarky Puppy had a little something for everyone Sunday night at the Mercy Lounge.

Snarky Puppy’s “Thing of Gold” off of their album 2012 groundUP , provides a good overview of what makes Snarky Puppy the band that they are. This track opens up to an electric piano laying down the chords as a smooth tenor sax sneaks in with a Latin beat coming up behind. Seems like a pretty typical opening for any jazz group, however an entirely new and unexpected flavor is added in when the electric guitar responds to the call of the sax. This sets the stage for the characteristic juxtaposition of old and new, synthesized and natural, smooth and abrasive sounds that make Snarky Puppy so appealing to a wide crowd.

The instrumentation of the band itself lends Snarky Puppy to be difficult to be easily characterized. In the video, a string section was featured, but there was nothing like that whenever I saw them at the Mercy Lounge Sunday, and generally the entire group does not tour. Some of the guitar solos featured in the performance could have easily belonged into the set of a 1980s rock band. Combined with the stylings of the rhythm section, I would say that the best general category to throw them under would be ‘jazz fusion’, but obviously a lot of these genres are arbitrary and can mean different thing to different people. Whatever you call it, this conglomeration of instruments caters to Snarky Puppy putting on a great show.