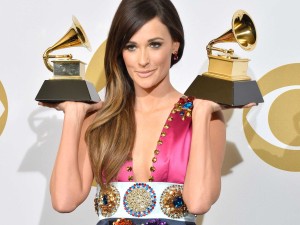 This boot stompin’, Texas native has carved her way into the music industry in the last whirlwind of a year. With two Grammy awards and a CMA award under her belt, she embarks on summer tours with country singer, author, poet and activist, Willy Nelson and mega pop star, Katy Perry. With countless articles written by Perez Hilton and Billboard and many top 100 albums of 2013 lists, Kacey seems to have become the darling of the music industry. The real question is where is all this momentum heading? Lacking a single to make top 10 on country radio and with most country stations refusing to play her latest single, “Follow Your Arrow,” many are questioning what lies ahead in this bright, 25 year olds future.

I woke up this morning to the sweet melodies, quirky rhymes and bluesy twang of Kacey Musgraves flowing through my radio speakers. Surprisingly, it was coming from a local alternative station. In a fifth of a second I went from surprised to delighted that Kacey was finally getting the radio recognition she deserved.  With a classic country style, but controversial themes, Kacey has yet to find a place in the heart’s of radio music listeners. Covering topics such as gay marriage, smoking marijuana and no-strings-attached relationships, Kacey doesn’t cater to the general population of country music listeners. She has no intentions of changing who she is and acknowledges the fact that not everyone will like her. Does all this qualify her to be on alternative radio?

Personally, I have always known alternative radio stations to play the best music they could find and offer the listeners music from a variety of generes. This kind of music started as art and musicians doing what came natural to them until enough misfits were around to start a new genre, alternative music. Now we associate anything that isn’t in one of the main genres of music as alternative. Many alternative stations have played music of great artists such as Brandi Carlile and Johnny Cash because it worked with their format and audience. Yes, it crossed over with country, but it also was pleasant to the ears of alternative music listeners. Kacey fits in perfectly with these guys; her songwriting stands to prove it.

Kacey wasted no time finding the best Nashville songwriters to write with. When writing her album, “Same Trailer, Different Park,” she wrote solely with some of her best friends: Luke Laird, Shane McAnally, Josh Osborne and Brandy Clark. She penned “Undermine,” used in ABC’s Nashville, with duo, Sugar & the Hi Lows’, Trent Dabbs exposing her love for a softer, more singer-songwriter and indie style of country music.

Writing songs with catchy hooks and unconventional lyrics is what Kacey does best. It is our job to do the rest and set her career on fire while exposing it to a wide population of listeners eager to hear unique, different music.  I know Kacey Musgraves will be spinning on my record player for a long time to come; I can only hope that radio stations will spin her singles just as much.