Early-career mixtapes are often exciting event releases with production quality indistinguishable from a studio album. Think Acid Rap, The Weeknd’s remarkable 2011 mixtape trilogy, or Drake’s own So Far Gone. Once the major label contract is signed, however, “mixtape” doesn’t really connote high-quality, important work. One can argue mixtapes are rawer versions of more calibrated studio releases, but it’s hard to shake the nagging thought that mixtape tracks weren’t good enough to hold over for the album. Often when it comes to mixtapes, only the most dedicated fans need apply. So what’s this mean for If You’re Reading This It’s Too Late? 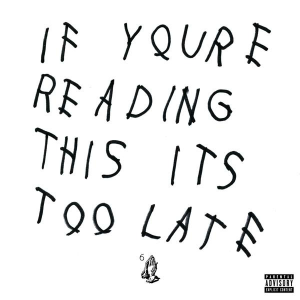 First off, there’s nothing wrong with this release. The key to a mid-career mixtape’s merit is likability, and Drake is plenty likable. The already-converted will find lots of value: 17 tracks packed with great lines and beats, with guest features kept to a minimum so as not to dilute the Drake experience. If you’re reading this article wondering whether or not you should check it out, just answer one question: do you like Drake? If you do, you’ll probably like If You’re Reading This It’s Too Late. If you don’t, you probably won’t. If you aren’t sure whether you like Drake, you should go listen to Take Care.

My favorite tracks on If You’re Reading This… are the short, tight raps that pop in unassumingly. “Energy” and “10 Bands” are recharged versions of “Started From the Bottom”. “6 Man” is even better, with low-key club production backing memorably suave-mode Drake. The album overall sounds a bit middle-of-the-road compared to emotionally stark moments on previous albums — there’s no “Marvins Room” or “Worst Behavior” — but tracks like “Now & Forever” and “You & the 6″ do a great job further developing Drake’s melancholy nice-guy character.

“6PM in New York” is essential: it rides high-flying, starry-eyed brass synths like “Empire State of Mind”, and radiates positivity like “Hold On, We’re Going Home”. For all Drake’s convincing us he’s got it all and it hasn’t helped, on this track he is gracious, appreciative, and hopeful. It’s brighter than the rest of the mixtape and thus relegated to bonus track status, but it’s aptly feel-good enough in itself to build a case for Drake to explore the territory further. Whether he does or not, “6PM in New York” is a quietly spirited gem that closes out a high-quality hangout with Drake. It’s hard to complain about getting more of something good, so even if If You’re Reading This… doesn’t top Nothing Was the Same or Take Care, we have an hour more Drake than we had a week ago. That’s decidedly a good thing.