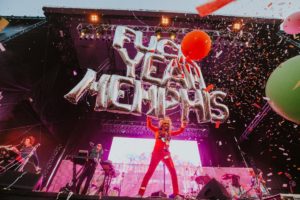 One of the nation’s best kept musical secrets lies a mere three hours away from Nashville. Beale Street Music Festival, located in my hometown of Memphis, TN, consistently has one of the best small-festival lineups each year for only a fraction of most festivals’ price. I got the great pleasure of being able to work press this year, and as a result fell even more in love with my favorite Memphis event of the year.

Taking place in the historic Tom Lee Park, situated gorgeously next to the Mississippi River, Beale Street Music Fest usually occurs the first weekend in May, perfect timing for a quick weekend trip at the end of exams. This year the lineup included a good mix of contemporary superstars like Tyler, the Creator, Post Malone, Logic, and ODEZA as well as older fan-favorites David Byrne, Erykah Badu, Alanis Morissette, The Flaming Lips, and Jack White. At 41 years old, Beale Street Music Festival does a better job than many festivals at bringing a diverse set of performers to satisfy the both the younger and older crowds which inhabit the historic city. Recent artists have included Paul Simon, George Clinton and the Parliament Funkadelic, Hall and Oates, John Mayer, Bob Dylan, and a number of other pantheonic performers. 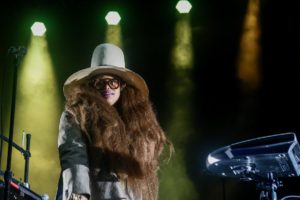 But the festival excels in more than its choice of artists. Starting at $95, the tickets to the festival run the average music lover significantly less than most festivals of its calibur. Compare this to Bonnaroo, which starts at $275 (not including the price of the camping spot or other necessary extras), and it can be seen clearly that this festival’s price is unbeatable.

As a member of the press team, I was able to see some spectacular performances this year. Starting on Friday May 4, the first night of the festival, I arrived early at one of the three stages in order to get a good spot for Tyler, the Creator that night. By the time the sun set, I was feeling energized for my first Tyler concert. Flower Boy was one of my favorite albums of 2017, so I was excited to witness Tyler’s live spin on a relatively low-key LP. Shortly after the band Cake left the stage, the crew began filling the sparse landscape with large, forest-like set pieces. Vines and prosthetic greenery, large paper mache logs, and most notably a giant tree stump right in the middle of the stage, complete with a walkable ramp. After I had been impatiently gazing at a blank stage for about an hour, the lights dimmed and Tyler leaped onto the stage, donning his newly-polka dotted hair. His set was electrifying, as he performed numbers from his stellar 2017 LP as well as Wolf and Goblin fan-favorites. 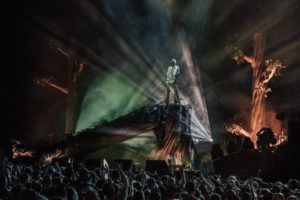 The next day of the festival I arrived much earlier, hoping to take advantage of the wide variety of artists that the Beale Street Music Festival invariably offers. One of the many great things about the festival is that the three stages are all close together, so bouncing from stage to stage in one day to catch pieces of multiple sets is far from a problem. After wandering for a bit and taking in some of the stellar local talents, I made my way to the hip-hop stage to catch Memphis legend Al Kapone perform in his city for what must be the hundredth time. He has a distinct way of working his crowd, inspiring energy from younger concert-goers and dedicated Memphis Rap fans alike. After Kapone, I got to see NYC rapper/chef Action Bronson on the same stage, who took time out of his set to stop the music, quiet the crowd, and watch the amber sun descending upon the Mississippi River. That was a beautiful moment at the festival when a large crowd united in silence with an artist to watch the sunset.

After spending an afternoon at the River Stage, which held mostly R&B and Hip-Hop, I beelined to another stage to see David Byrne, former frontman of the Talking Heads and bonafide music legend. He had his stage lined with a dense perimeter of chains hanging from the ceiling, casting a uniformity over his set that was only to be accentuated by him and his backup musicians, who were all clad in gray. Byrne, now 66 years old, had the best energy of any of the performers I saw all weekend. The man’s still got it. 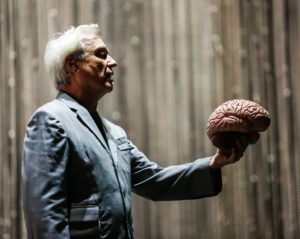 These vignettes are just some of the highlights of my time at the festival. I’d be lying if I said I didn’t enjoy just about every single artist I saw. To me, festivals such as this one are made up of small moments. We certainly can’t remember performances in their entirety, especially not thirty of them of them in a row, so we instead focus on bits and pieces that stand out. Last year, I remember eating cheese dip with my friends while thrashing around to 2 Chainz. I remember standing in awe as MGMT played music from their most recent album for the first time ever in public. This year, I will always remember screaming like a fool when I first saw queen Erykah Badu, watching David Byrne talk to a plastic brain, and laughing gleefully as the Flaming Lips brought out a giant balloon with the words “F**k Yeah Memphis.”

Every year, Beale Street Music Festival is filled with unforgettable moments such as these. The unique mixture of artists, the phenomenal host city, and the unbeatable price make it one of the highest-value festivals in the whole country. Make sure you keep this in mind when planning your festival season this year. Regardless of your age, tastes, and financial situation, Beale Street Music Festival has something for you.